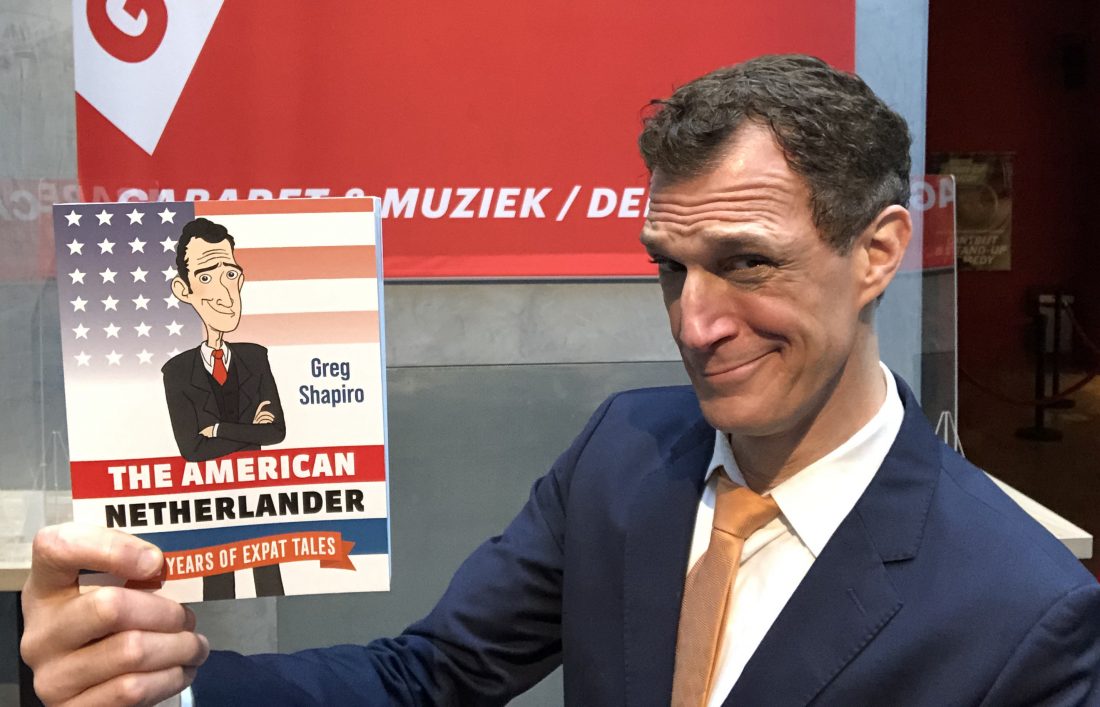 Presenting Greg Shapiro’s third book, THE AMERICAN NETHERLANDER: 25 Years of Expat Tales. The first copy was given to reviewer Michael Hasted of ARTS TALK MAGAZINE. Watch as Shapiro gives Hasted approximately 30 seconds to read the book before conducting his interview.

Good news: the interview was good. And the book review was excellent.
THE AMERICAN NETHERLANDER

One silver lining to the corona cloud has been that it has forced us all to be pragmatic, stoic even, encouraging us to be resourceful and find new ways of doing things. Performers, especially those who depend on live audiences, have had a very hard time. You can’t act in a vacuum, there’s no point in singing alone in your room and you can’t tell jokes to yourself. So, it’s good to have another string to your bow.

The American Netherlander is Amsterdam-based comedian Greg Shapiro’s third book. Put together over the past nine months when gigs were cancelled or greatly restricted, Greg has brought together his two previous books, added a lot of new material and presents us with a memoir of his life in his adopted home, along with a comprehensive guide to living in it. The book is full of apposite observations, canny advice, witty asides and some nice cartoony illustrations. It could well have been titled The Netherlands – The Good, The Bad and The Ugly because, like the Dutch, it does not pull its punches and is proud to tell it like it is, warts and all.

We start off with the back story about how the author first came to The Netherlands twenty-five years ago to work in and help establish the Boom Chicago comedy venue in Amsterdam. He nicely describes the culture shock and disavows numerous stereotypes and preconceptions. He discovers that what he had grown up in the States believing to be Dutch Apple Pie was in fact nothing like the genuine article and that the chunky real thing made his American usurper mere apple pulp fiction. After a while, as he marries and settles down, he loses track of his identity and begins to suffer from MND – Multiple Nationality Disorder.

Greg takes us, chapter by chapter, though the different aspects of Dutch life and how to cope with, sorry, appreciate them. We learn, of course, about sex and drugs and the ubiquitous Coffee Shops. We find out more about bike etiquette and how the Dutch fail to reconcile their desire for personal freedom with the necessity of conforming and keeping a low profile.

But there is a more serious side too with the vexed and contentious issue of Zwarte Piet being covered in some detail along with the problems of immigration.

If you are an expat in The Netherlands, Zwarte Piet will already have raised your eyebrows by an inch or two. If you are elsewhere in the world you will find the phenomenon of Zwarte Piet (Black Pete) hard to believe in this day and age when black live really do matter.

The Dutch have Santa Claus with the best of ‘em, or Sinterklaas as they call him, but that’s of no matter. The difference is that while most Santas are content to have a horde of helpful elves and reindeer as acolytes, old Sinterklaas rides a white horse and has a swarm of black helpers dressed up in gold and red velvet. Piet is a sort of black Robin to Sinter’s bearded Batman. These kids are unashamedly blacked- up à la Al Jolson and parade around with their sacks dispensing candy to the children – but politically correct they certainly are not. Greg examines the question in some detail and is able to see the Dutch point of view. This year the big parades of 5th December were cancelled and it seems the Dutch might surreptitiously use that as an opportunity to phase out Black Pete. Some have started calling him Sooty Pete instead . . .

Serious though it is, the subject is treated in an easy going, unpreachy, unjudgemental manner by Greg and he gives us an insight as to how the phenomenon was considered normal and acceptable and how it might continue and/or change.

The last section of the book re-utilises Greg’s previous book How To Be Dutch: The Quiz. This is both funny and informative. Questions are posed and you have to select one out of three possible answers. The correct answer is given and an explanation of why it is. Again, this is broken down into sections like bikes, health care, politics and . . . err . . Zwarte Piet.

There is even a Oh, I never knew that section which lists, in rhyming couplets, things we never knew were Dutch, like half the place names in New York City, LED lights, multinationals Philips and Shell, the microscope, the discoverers and namers of New Zealand etc etc.

To round it all off there are pages of photos of shop signs taken by Greg over the years, showing how Dutch can produce names and words that we English speakers find amusing, For example a hairdresser called Down Under Hair or the Bad Hotel or the Dutch senator called Tiny Kox. You’ve gotta love ‘em.

The American Netherlander provides us with lots of information about  the Dutch persona and way of life and is the result of, not only, Greg’s personal experiences and insights but a lot of thorough research as well – oh, and the laughs, don’t forget the laughs.

This book works on the level of allowing other expats to smugly sit back with a knowing smile on their faces but also as a guide book exploring the mores of a tiny nation that has contributed more to civilisation and to its fund of knowledge over the past five centuries than most people are aware of or care to acknowledge.

Nicely laid out with lots of cartoons on classy coated paper Greg Shapiro’s The American Netherlander is recommended on all levels.  Michael Hasted   8th December 2020
FOR ONLINE REVIEW & INTERVIEW, GO TO ARTSTALK MAGAZINE: