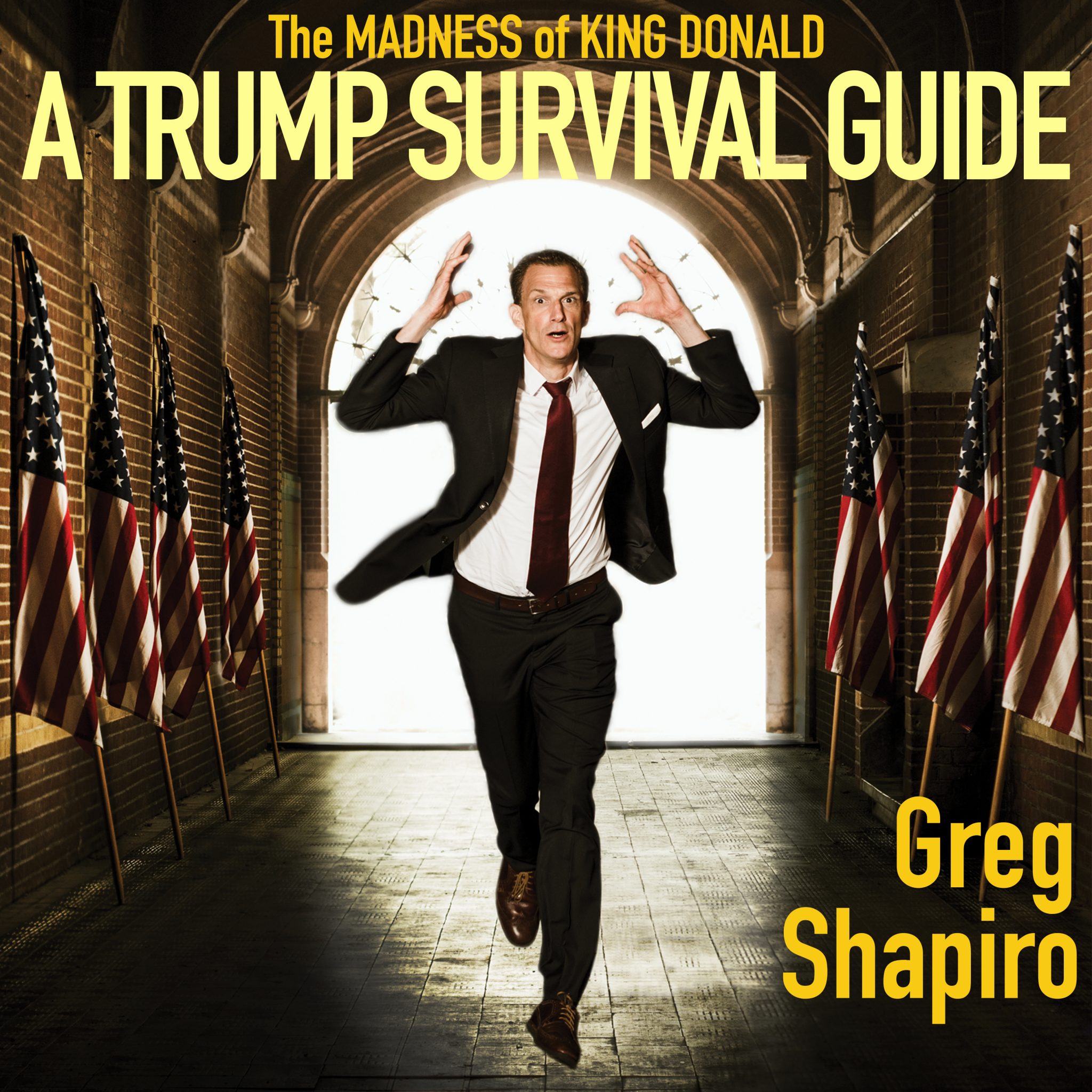 Shapiro salutes the 45th – and possibly final – President of the United States, daring to give a psychological analysis of Donald Trump. And the results are hilariously therapeutic.

The Madness of King Donald is an evening of standup comedy, with improvisation thrown in. Every show features a chance for the audience to ask questions to the President. As ‘The Original Fake Trump,’ Shapiro remains committed to giving more press conferences than the Real Donald Trump.

VOLKSKRANT: 4 STARS ‘Greg Shapiro Is the Perfect Person to Give Us Trump Lessons.’

marvelousz.com: ‘The Madness of King Donald is an Absolute Must.’ 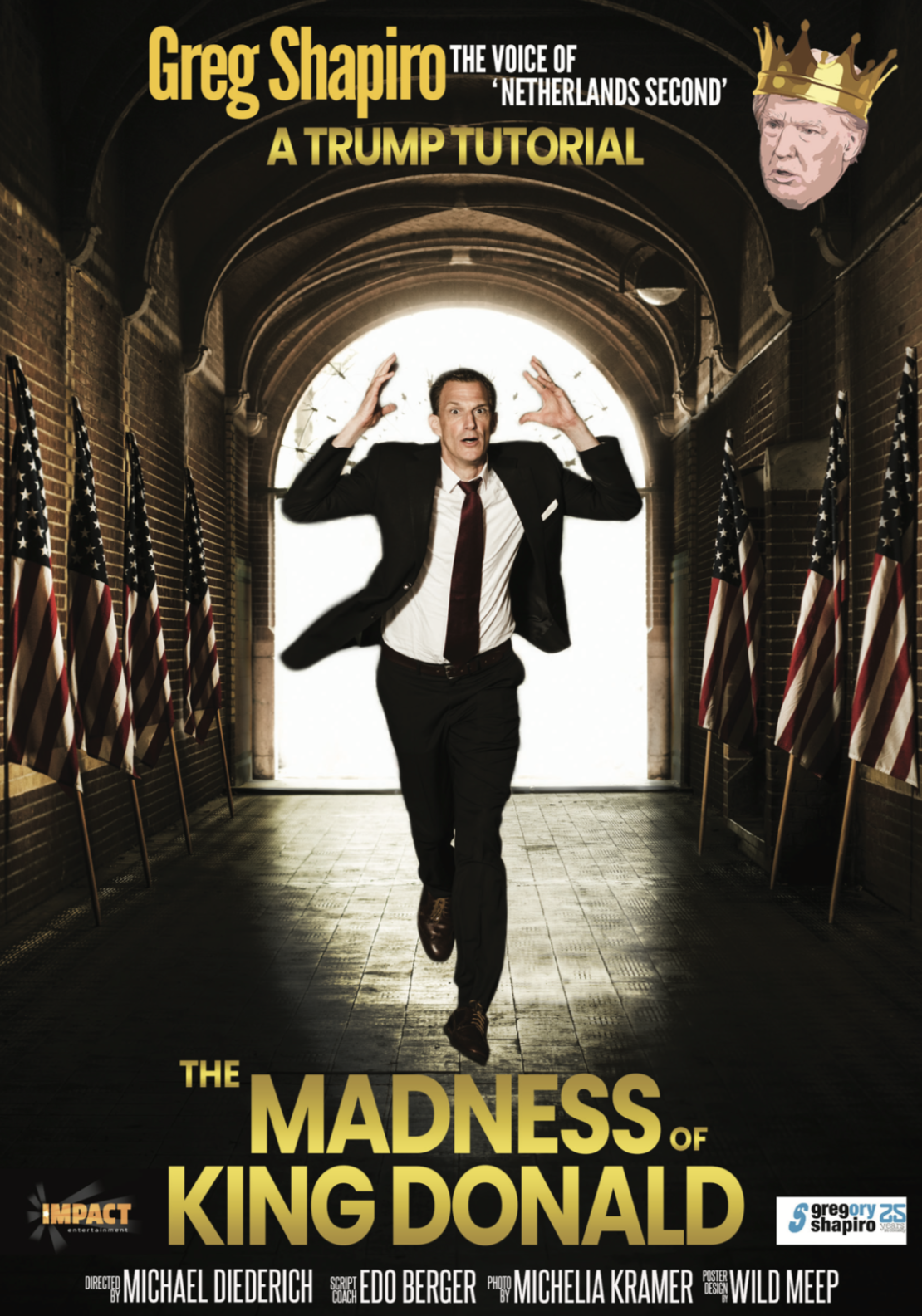 Shapiro not only knows Trump’s how to talk like Trump (as he proved on Zondag with Lubach), but he also masters Trump’s hand gestures and his incoherent way of formulating a sentence.

Greg Shapiro has exactly the right qualifications to make a comedy show about President Donald Trump for a Dutch audience. Shapiro (50) is an American who left from Chicago in 1994 to play at Amsterdam’s Boom Chicago theater. That’s where he developed a good Trump imitation, which went viral worldwide in the the ‘Netherlands Second’ video from TV program Zondag with Lubach.

Shapiro now kicks off a Dutch theater tour with an English-language show, in which he gives a Trump tutorial. A ‘survival guide to the collective madness we’ve been living through tor the last two years.’ With his presidential suit and too-long red tie, Shapiro stands before a large screen on which he projects news photos and satirical images.

THE EVENING IS CREATIVELY BROKEN UP INTO PARTS.

Shapiro presents a five-point tutorial on how to better understand how Trump communicates. About Trump’s accent: ‘He uses the typical words of a New Yorker, but he talks like a surfer from California. Exactly the two states where has no chance of getting elected.’ Shapiro later presents the State of the Union speech as a bingo game – as well as giving a press conference as Trump, with a witty improvisation for every random question.

Shapiro does not put on a wig, but can still change convincingly into Trump: not only his diction, but also his hand gestures and the incoherent way he formulates his sentences.

However depressing the actual news may be, the good-natured Shapiro continues to look for the ‘bright side’: we have survived Trump for two years already, surely we can survive another two. 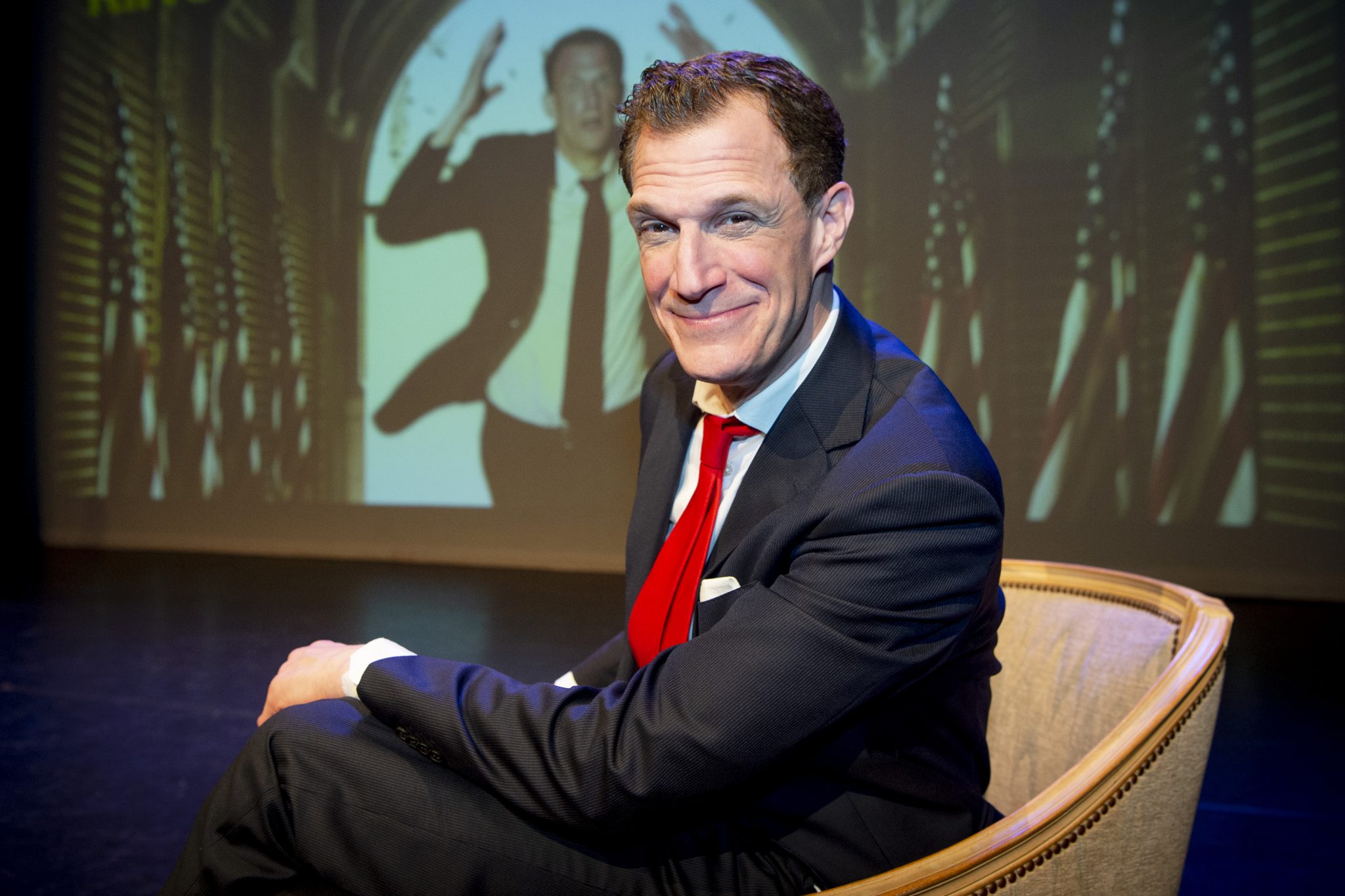 For protesters, comedians, critical tv stations, photo shoppers, cartoonists and visual artists with common sense, playtime officially kicked off more than two years ago with the Donald Trump era. A playtime with a crazy babysitter, but still quite nice. … Greg Shapiro has in any case made a strong show out of that political misery.

Yes, it is hoped that the American electorate will see that the United States has utterly ridiculed itself under the 45th President. But that is by no means certain, because – when we look at Geert Wilders and Thierry Baudet in our own country – we see that certain diseases turn out to be global and aren’t going away anytime soon. After Shapiro cited a remark from an American hothead that instructed the Native Americans to “go back to their own country,” we see a wildly scrawled cry on a Dutch wall: “Turks go back to Morocco.”

Humor is a form of ducking ones head until the madness is over, because fleeing this political mess is no longer possible. Quite calmly, Shapiro asserts that we have survived with Trump for two years already, so it must also be possible to endure his antics for two years more.

UNLIKE MOST STAND-UP COMEDIANS AND CABARETIERS IN THE NETHERLANDS,

Shapiro was not done talking after an hour and a half. His amazement, bewilderment and anger at what has happened over the past two years is so great that he made a truly “evening-filling” program from The Madness of King Donald, with intermission. For a moment you fear the worst, because it’s normally more than enough for a comedian to keep rattling on for 90 minutes. But Shapiro has arranged his show, which is directed by Michael Diederich, in an extremely smart and varied way.

Shapiro lets us reminisce about the video “Netherlands Second” of the Arjen Lubach team, in which the Netherlands presents itself in Trumpian superlatives. The fantastic video was recorded by Greg Shapiro with his Trump voice.

he analyzes the accent (‘a New Yorker with a California accent, who could never get elected in either state’), his incoherent ‘word salad’ language (‘a carcrash in slow motion’), his body language and his apparently secret language, with which he stirs up America’s fear of becoming a ‘minority white’ country.

Along the way, Shapiro also practices the improvisational art of his old Amsterdam group, comedy group Boom Chicago. He asks the audience to name a household item (in this case a toaster), of which he manages to make a great, messy, half racist speech, without a single complete sentence. A press conference, Trump’s silly-macho way of shaking hands, an alternative anthem, a round of bingo with the audience, you’re never bored with Shapiro.

AFTER THE BREAK, SHAPIRO IS PLEASANTLY PERSONAL,

when he describes his meeting with the arch-conservative and pathological liar Pete Hoekstra, the American ambassador of Dutch descent in The Hague. Shapiro admits he cowardly avoided confrontation. That is a shame, because then – unlike in Dutch theaters – Shapiro would not have been preaching to his own choir.

Very nice is Shapiro’s comparison of the family situation at his childhood home in the US with current political situation – where his aggressive stepfather is Trump and his six-year-old sister very unexpectedly plays the role of Nancy Pelosi, the Democratic leader in the House of Representatives.

This reviewer relies on a daily YouTube viewing of American late-night comedy, such as ‘A Closer Look’ – a reliably anti-Trump segment from Late Night with Seth Meyers (a former colleague of Shapiro of Boom Chicago). This show by Greg Shapiro is a very welcome addition.

Greg Shapiro is the best Trump impersonator in the world, and he does not even look like him! Had a great night, laughed at those crazy Americans and the craziest, by far, or them all: the Donald.

The show is fast, witty, original and surprising. Shapiro is a comedian storyteller who still can not quite comprehend the madness of the 45th president of America himself. And of course he also (very snarkily) comments on the crazy Dutch.

Afterwards make selfies with Greg himself and buy his latest book, with dedication and signature from Shapiro himself. HIGHLY RECOMMENDED.