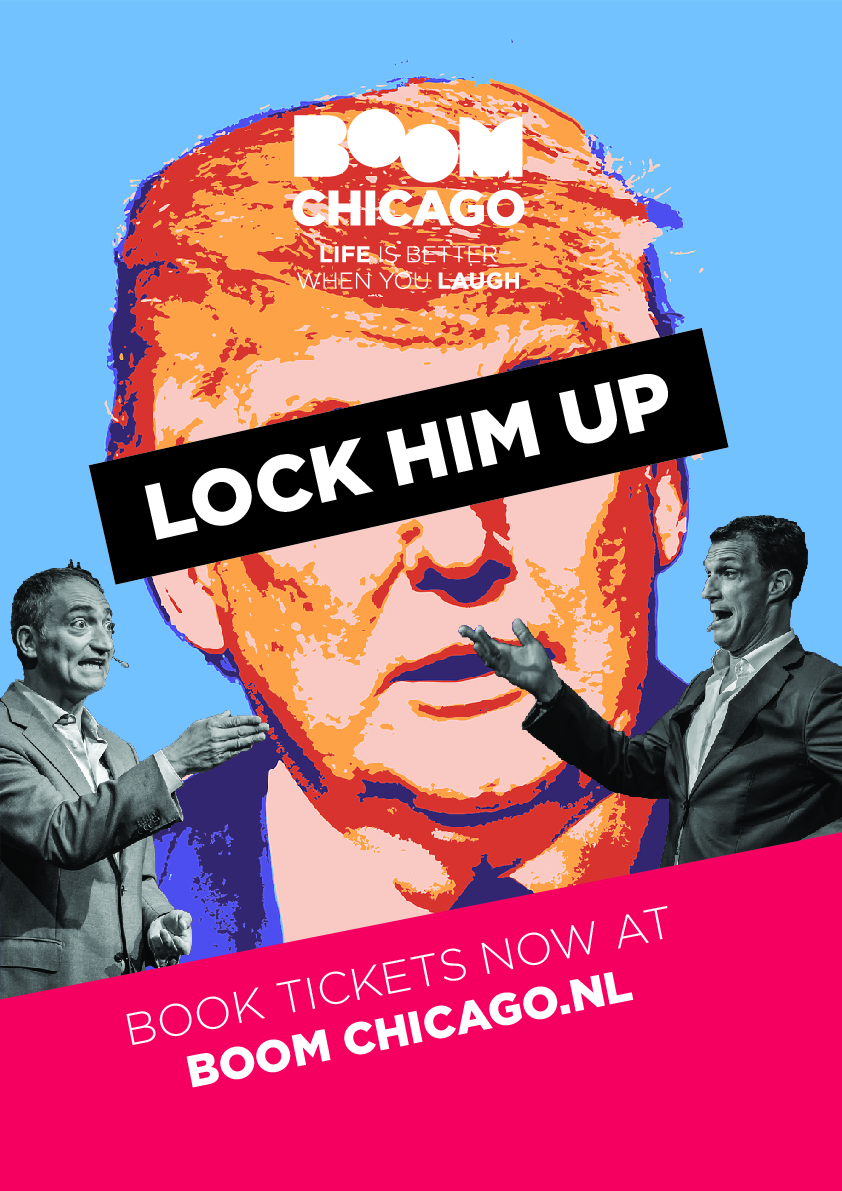 Boom Chicago presents their 2020 election show Lock Him Up: Make America Democracy Again. Political comedy veterans Pep Rosenfeld and Greg Shapiro and director Andrew Moskos take you inside the 2020 presidential race with stand-up and improv comedy, sharp satire and big laughs from an Amsterdam-American perspective. The world is holding its breath for the American elections. Facts are hard to agree on, and the media itself is under attack. With the truth fighting against manipulation, mudslinging, memes and fake news, this is the most unusual political year ever.

The Sequel to a Popular Favorite

Lock Him Up the Boom Chicago 2020 Trump Election Show is the welcome follow-up to Boom Chicago’s longest running show, Trump Up the Volume (the 2016 election show). Pep Rosenfeld, Greg Shapiro and Andrew Moskos have created shows with a focus on current affairs, politics and satire since they were in high school together. Lock Him Up by Rosenfeld & Shapiro is their 11th duo show at Boom Chicago.

There’s a lot to laugh about in Lock Him Up. The subtitle of their show is: Make America Democracy Again. Rosenfeld and Shapiro provide a nice replay of the insane Trump-Biden debate (“sponsored by Viagra”). They take on the personas of ‘Angry White Men,’ and they improvise as Trump and Biden hilariously by taking questions from the audience. Funny and disturbing, they showed in the ‘Spot the Truth’ section that virtually no one can tell the difference between lies and truth on the Internet anymore. And they impressed upon us the sad fact that Republicans are doing everything they can to put up practical barriers for Democrat voters to to cast their vote.

Greg Shapiro once again shows in Lock Him Up that he is an excellent Trump impersonator – Arjen Lubach was also able to make good use of that – but it is hoped that he will no longer have to imitate Trump after November 3.
Translation: Google. Edit: Shapiro

WATCH:
‘LOCK HIM UP’ the LIVESTREAM Standup Special on YouTube