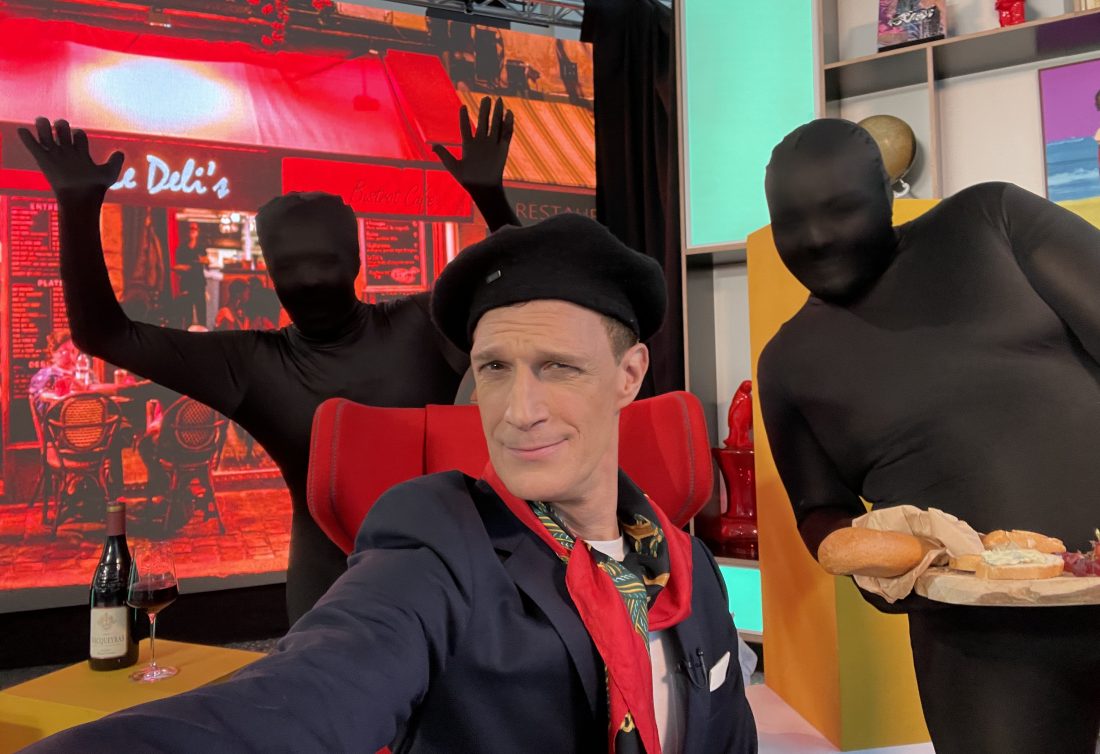 Previously, on CitizenM TV…
CitizenM Hotels: “Greg, help! Our annual offsite event is going to have to be a livestream. Can you host it and make sure it’s not boring?”
Greg: “Yes And – What if the interviews feel like the executives are on a TV show?” 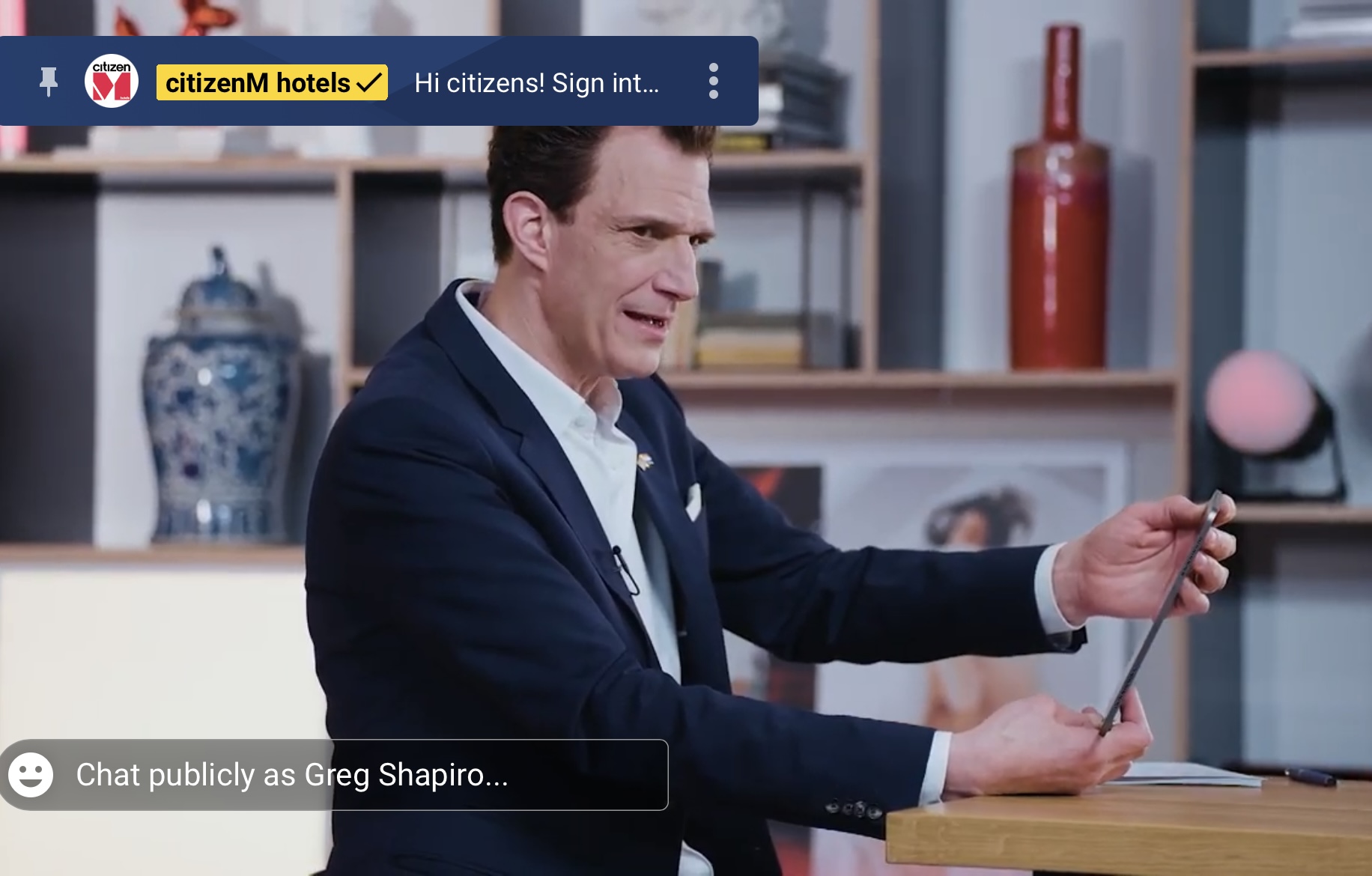 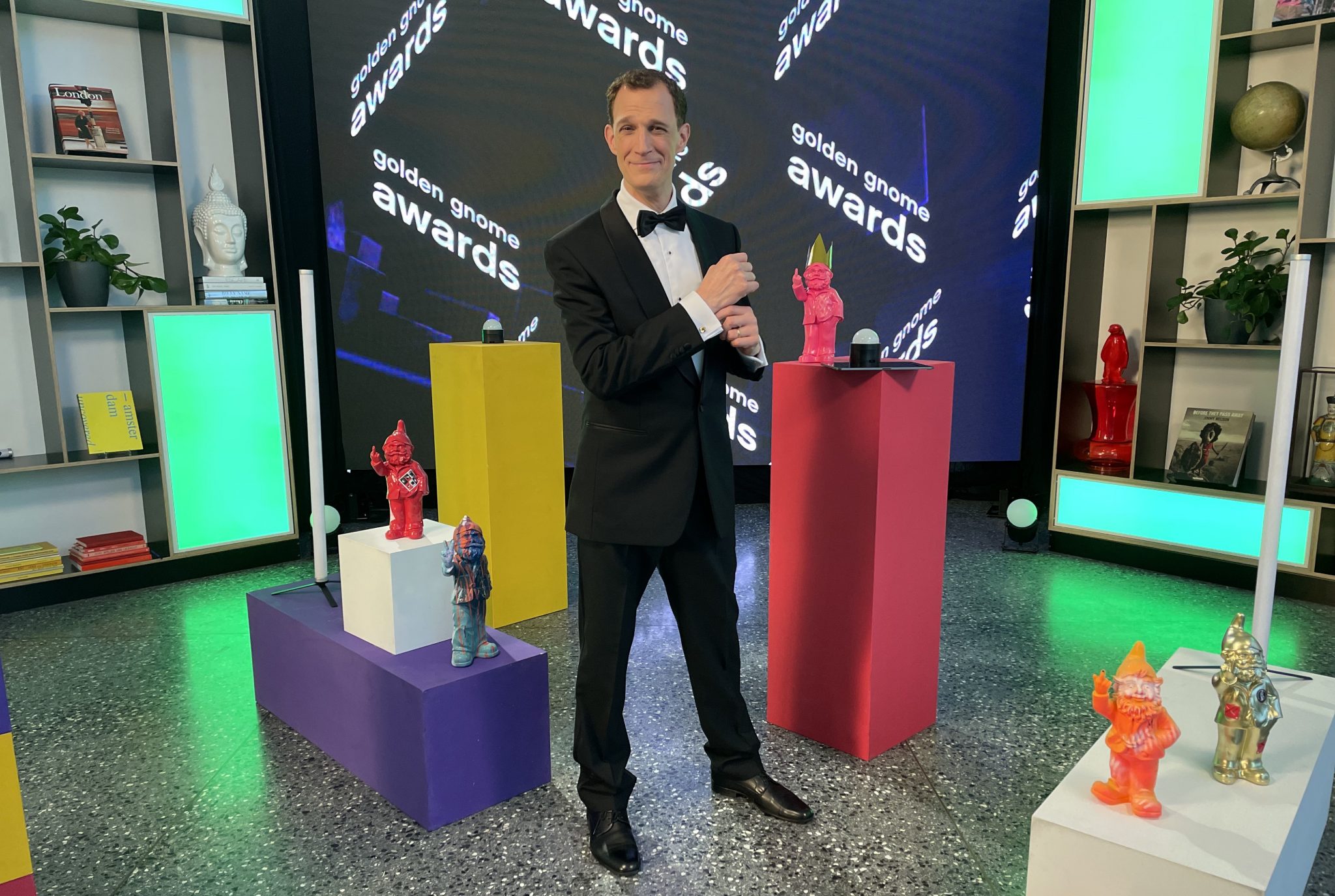 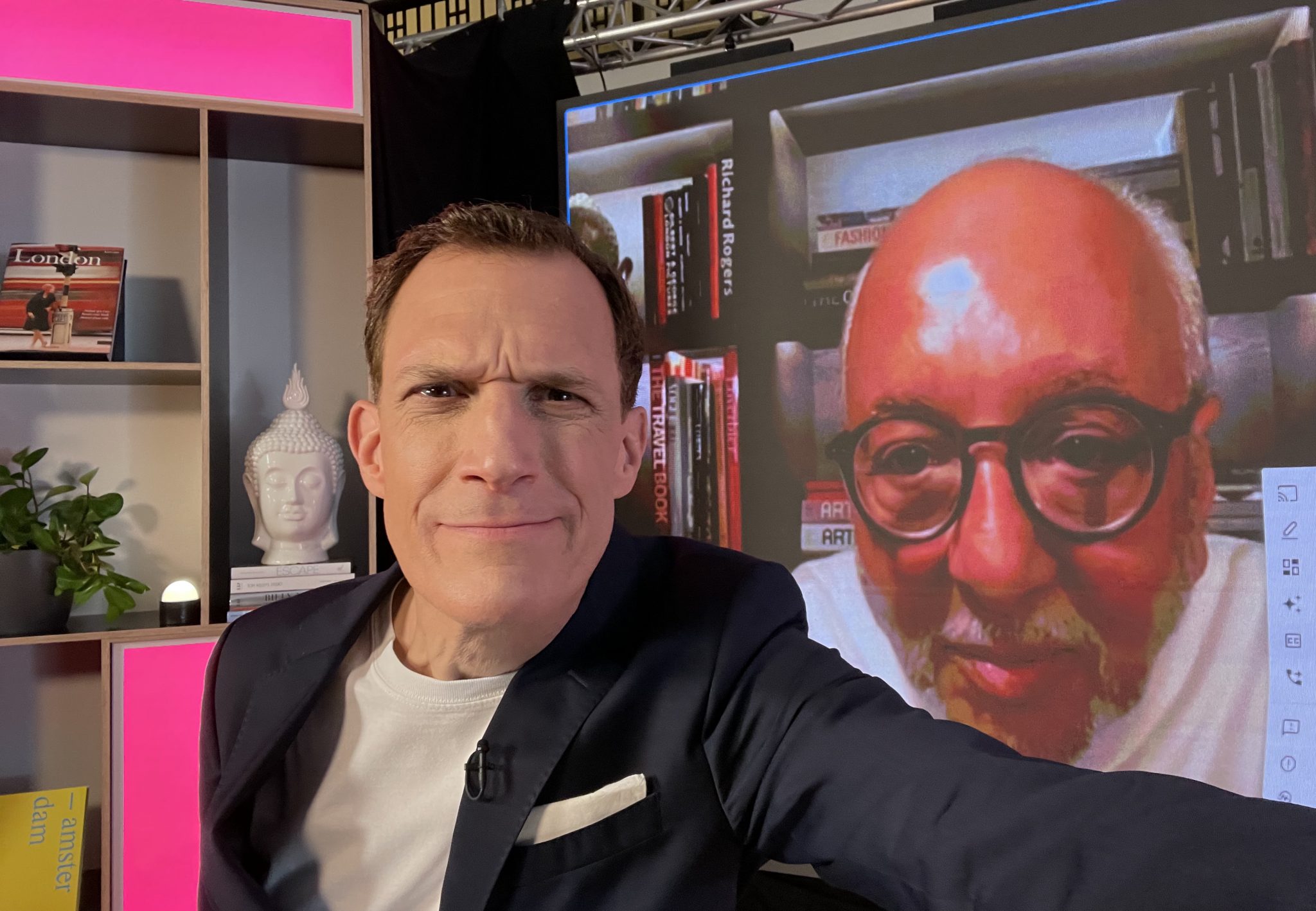 PRO-TIP: Your Livestream doesn’t need to be Live! Again, we had 3 days of production, with plenty of time for me to meet the C-level execs and get to know everyone – and get the best out of everyone.

Episode 2 didn’t just use 4k screens to patch in remote guests. This time we had an enormous video wall. 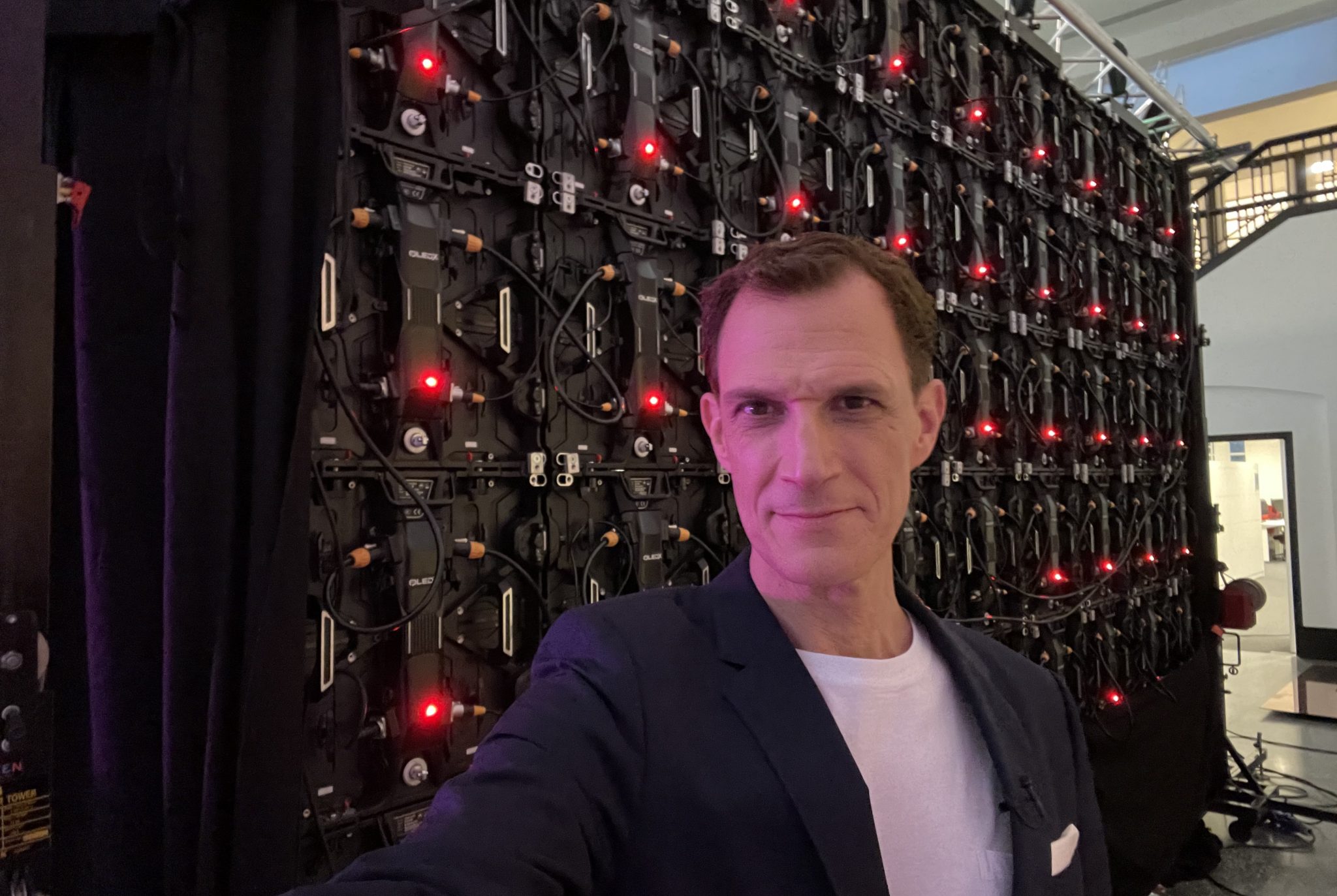 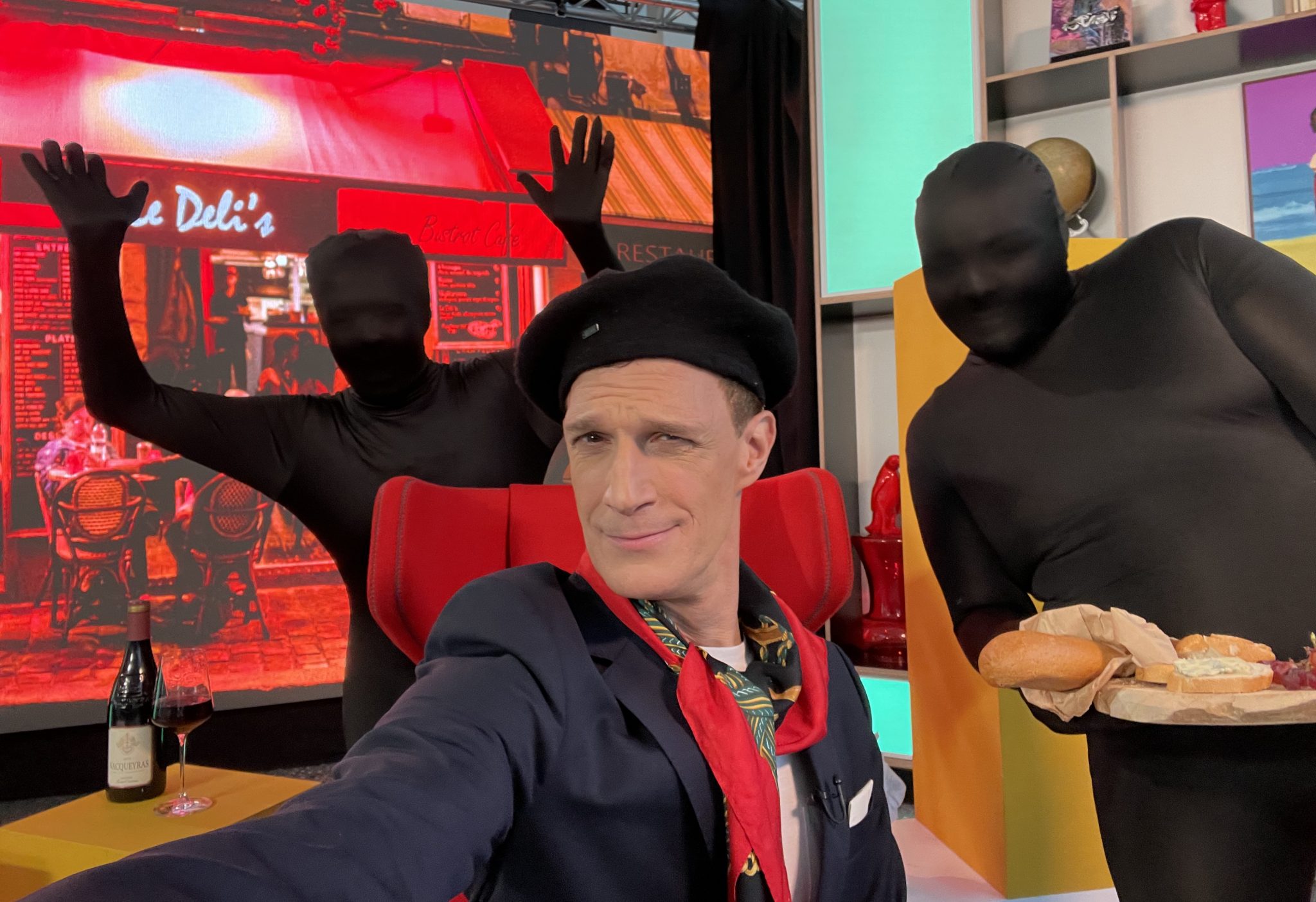 The script went high-concept for Episode 2. This time, I got to demonstrate the new contactless user experience with the help of Kabuki / Ninja actors in morph suits. (Actually, they were employees on the CitizenM team, and they were surprisingly good.)

And I got to play the World’s Worst motivational speaker – a cross between Ted Lasso’s alter ego Led Tasso and Yosemite Sam. 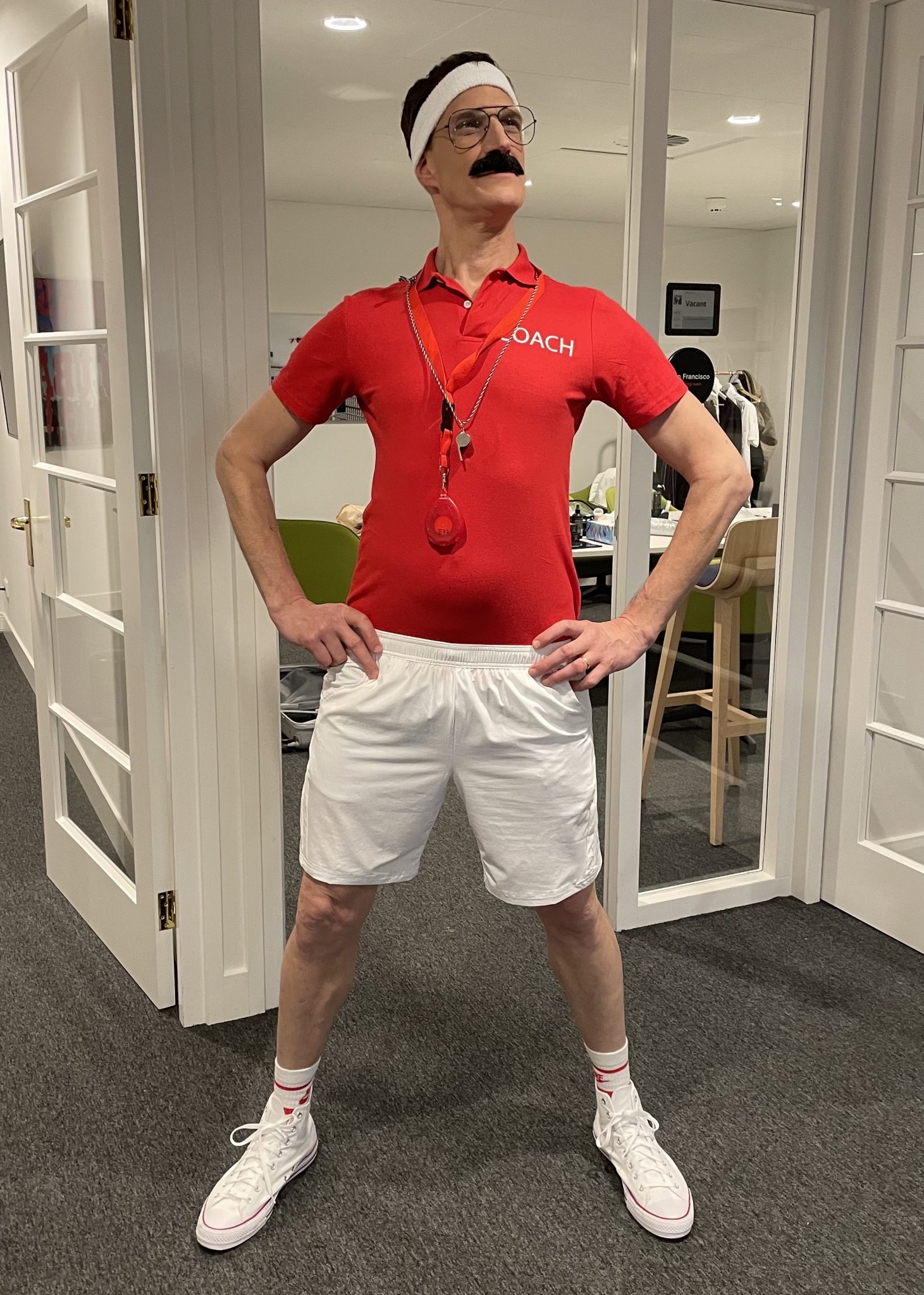 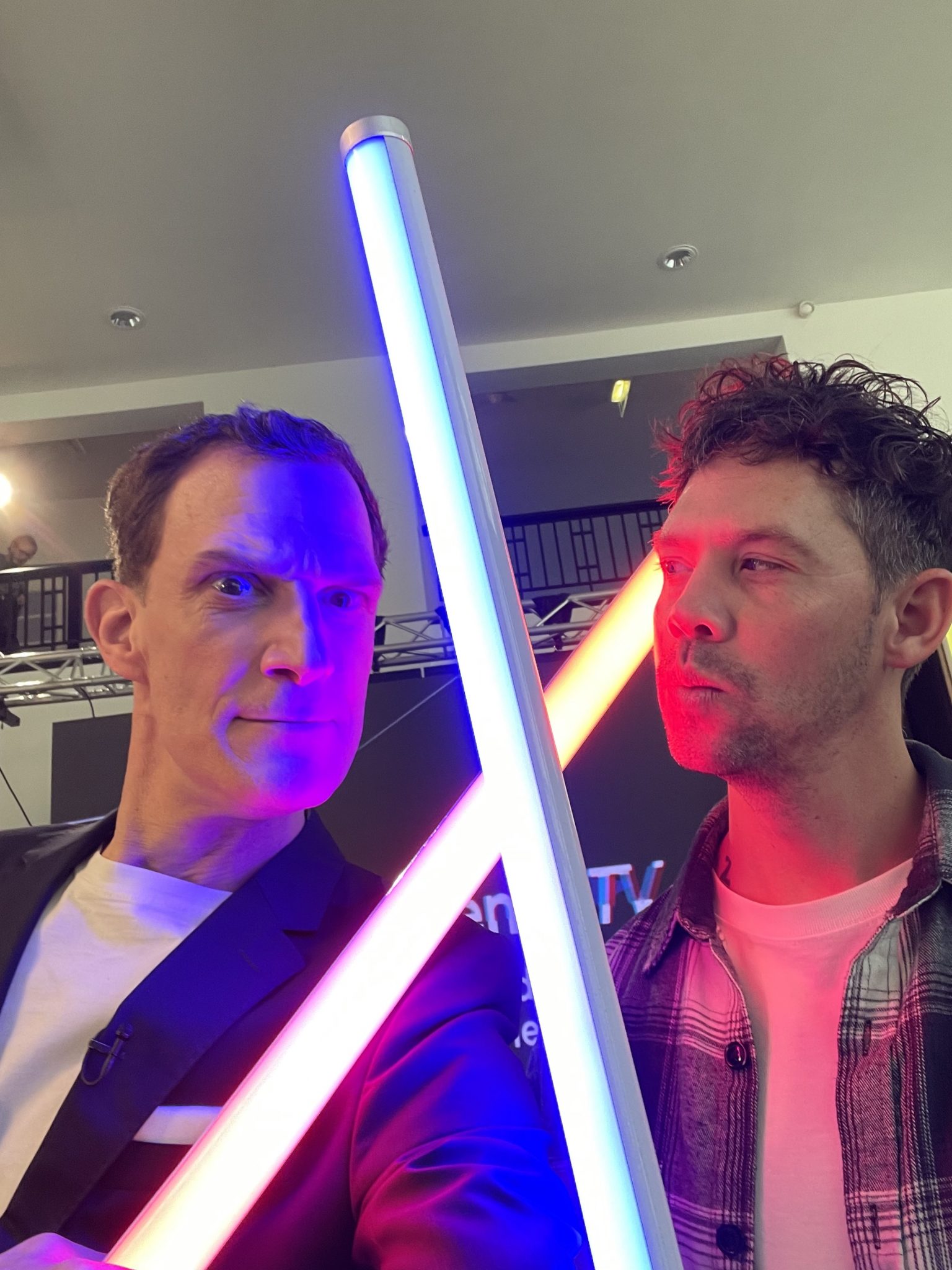 Most importantly, I convinced the lighting team to let me use the LED tubes for their obvious purpose: light saber battles with the director Victor Zwiers.

The priority on-set was to keep the vibe of a normal offsite event, as much as possible. Guess what? Top management is always going to be too dry – in the first take. But with a couple of retakes – and me more actively engaging them – the managers managed to loosen up and feel like they were talking to their team, in person. 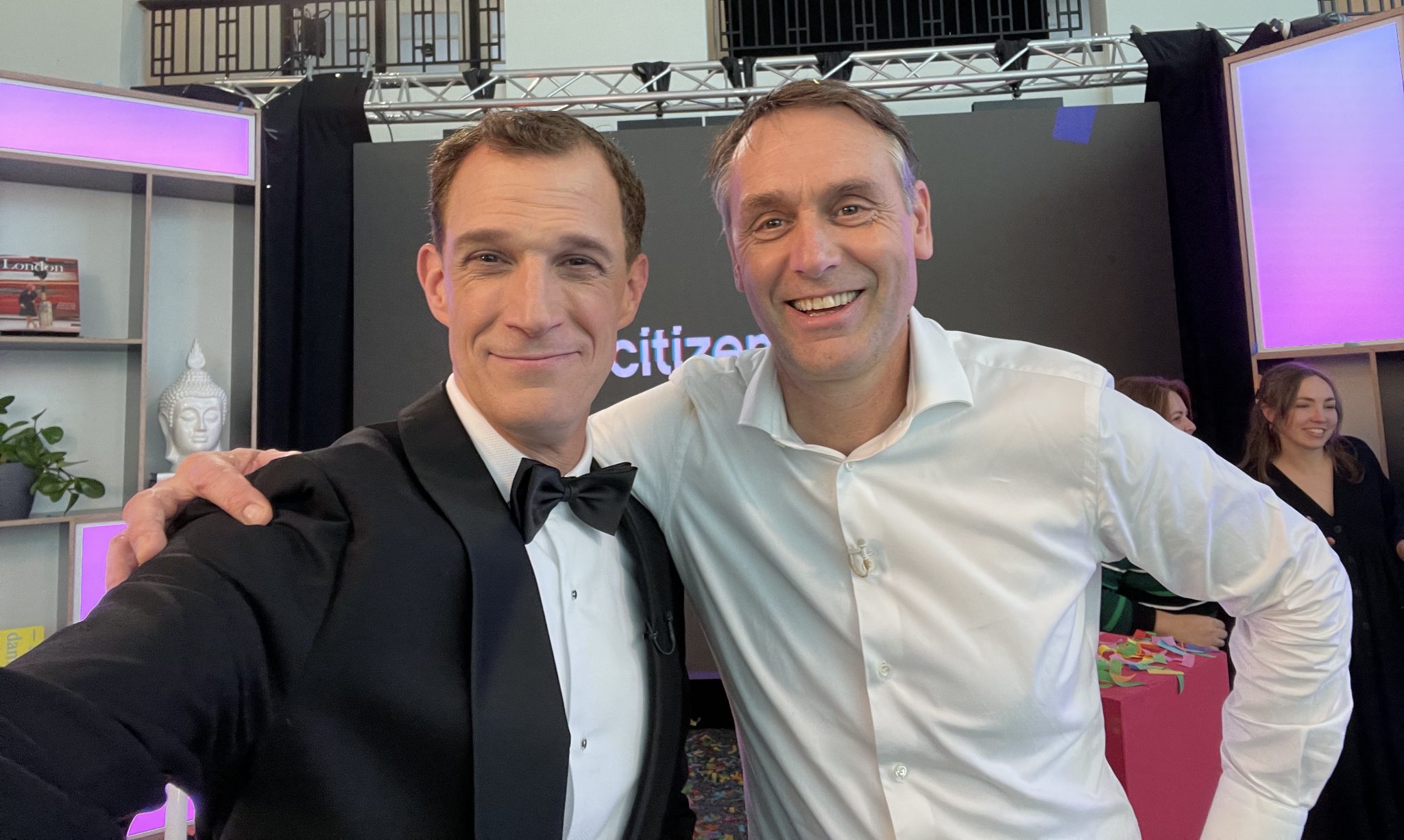 Again, the studio set required a negative Covid test – hence, we employed the ‘Bubble’ protocol. And we were able to give at least a one-arm hug. Hopefully next time we can do it in person! 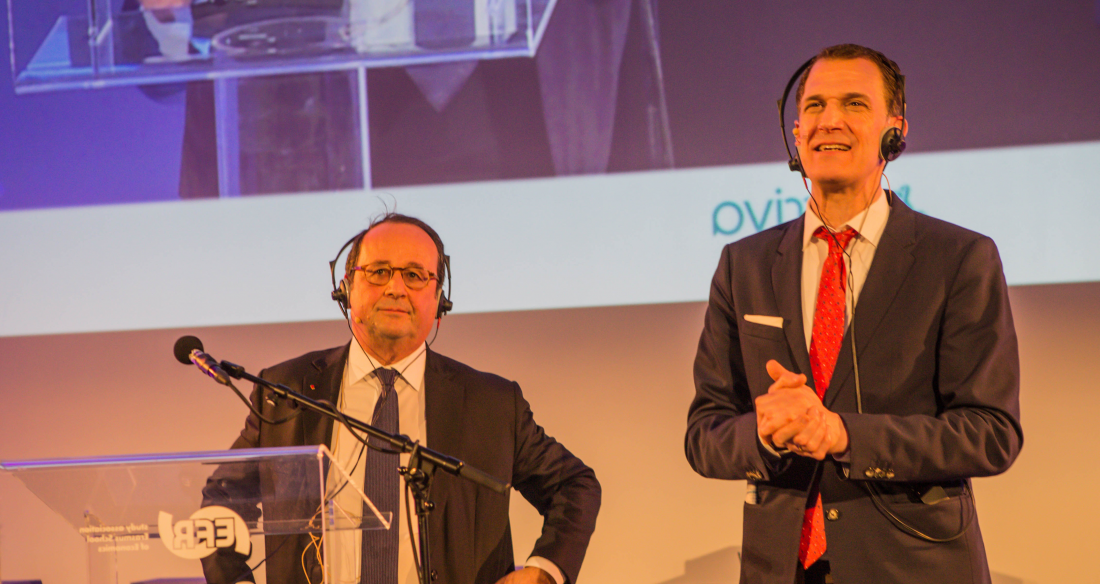 Since the Covid lockdown hit in 2020, I’ve been using the opportunity to branch out. One area that has been calling out to me is right around the corner in Belgium. It’s the EU HQ and the community known as ’The Brussels Bubble.’

A friend of mine in Brussels has been organizing a monthly EU-themed talk show called ‘Brussels Bubbles.’ And what do you know – they even have a website called ModeratingEU.  ModeratingEU is a booking agency dedicated to creating EU-themed events that are NOT BORING. And I offered my help.
https://moderating.eu/

Here are some examples of what you can find on my profile:

GREG SHAPIRO – Using humor to make your message hit home.
For 20 years, I’ve been using my background in comedy and improvisation to take dry subject matter and make it more fun – and more memorable.

– Laser-focus on your Main Message – and how to use humor & interaction to make it stick.

– Native English speaker, but also fluent in ESL ‘English as Second Language.’
– Experienced improviser. Even when your event doesn’t go according to plan, I make it look like part of the plan.

A Gentleman Onstage.
Greg uses humor, but always with a diplomatic touch. Literally. He has performed for the Netherlands Embassy, as well as hosting events for French President François Hollande, and once for King Willem Alexander of the Netherlands.

Greg has experience hosting events where everything goes right – and when it goes wrong. According to Judith de Lange from Dutch Data Center Hub: “Greg provided lots of laughter in an otherwise very serious crowd. And although confronted with some technical difficulties, Greg was well-equipped to improvise and let the show go on. I would definitely recommend Greg as a host!

A Published Author.
Greg Shapiro is the author of 3 books, such as THE AMERICAN NETHERLANDER: 25 Years of Expat Tales, available internationally. Greg uses his experience with dual nationality to bridge the gap between cultures, between organizations, and between the presenters and the audience.

RECOMMENDATIONS
“Greg’s hosting was sharp, tactful and very, very funny. We did not make things easy for him! He dealt brilliantly with the tailored EPO material.”
– Bert Lockhart, European Patent Office

“Greg made the difference between a pretty-good event and an excellent event. His total understanding of the content, his humour, and his optimistic persona gave the event depth and made it sparkle.”
– Sylvester Lindemulder, Logica Innovation Day

“Greg brought humor to our theme, mixed with a serious note. It gave energy and fun to a serious discussion, which led to more enthusiasm and interaction with our audience.”
– Marike Scholten, Windesheim Univ. Sustainability Event

“We had a lot of fun with Greg as our host for our young professionals event. A great mix between humor and serious interviews onstage. That led to good energy in the audience.”
– Marit van Heugten, Drecht Cities

ABOUT GREG SHAPIRO
Greg Shapiro graduated from Northwestern University in the US and then moved to Amsterdam to work with comedy theater Boom Chicago. He now has 20 years’ experience hosting events for multinational clients such as Philips, Shell and ING. Shapiro has hosted the tv show Comedy Central News in the Netherlands, and he is the voice of the ‘Netherlands Second’ video from 2017. Shapiro has published three books on Dutch culture. He has hosted events for the King of the Netherlands, the French President, and NATO. And he has performed in the Business Class section of a 747 flying to Chicago. 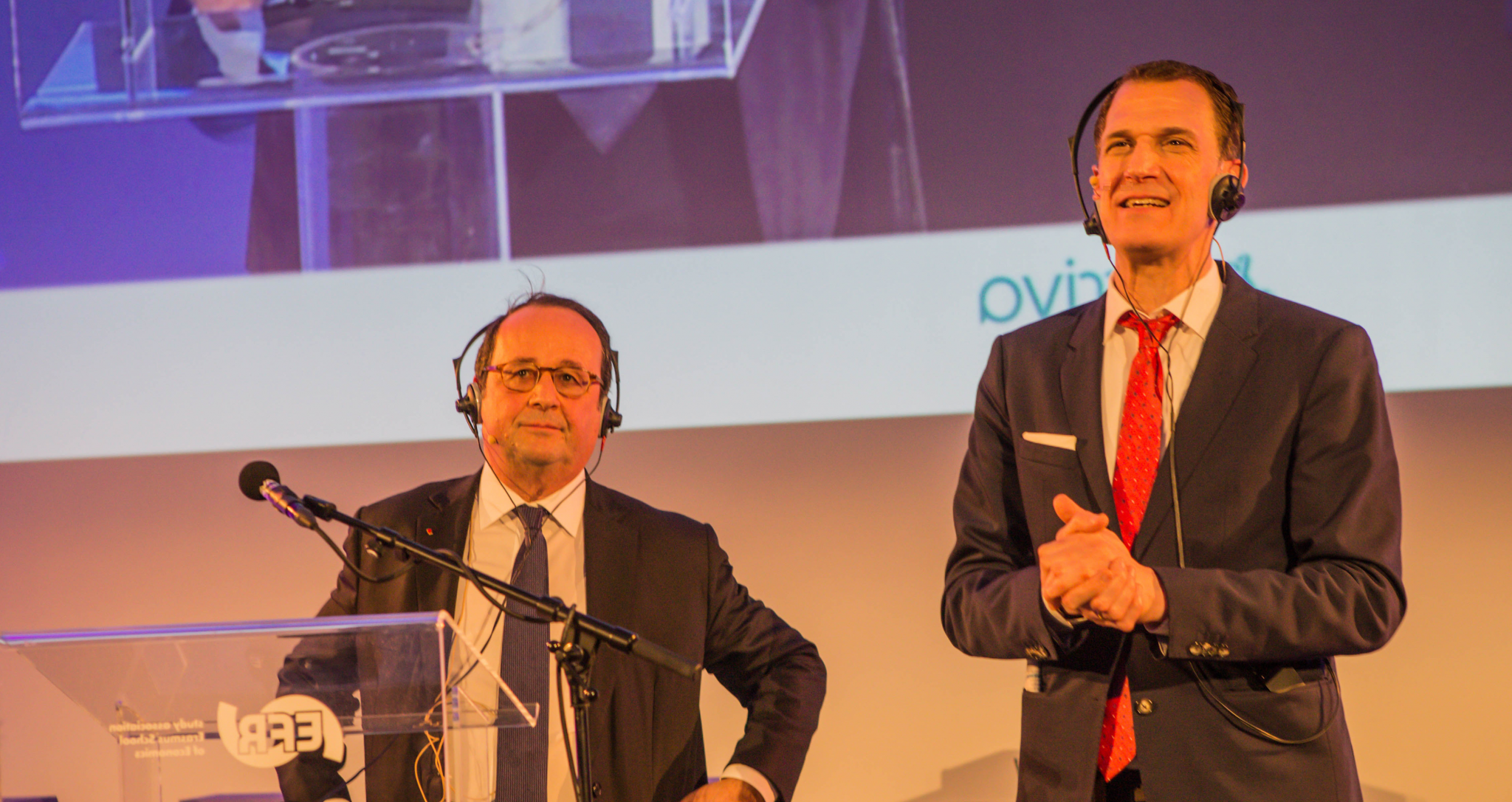 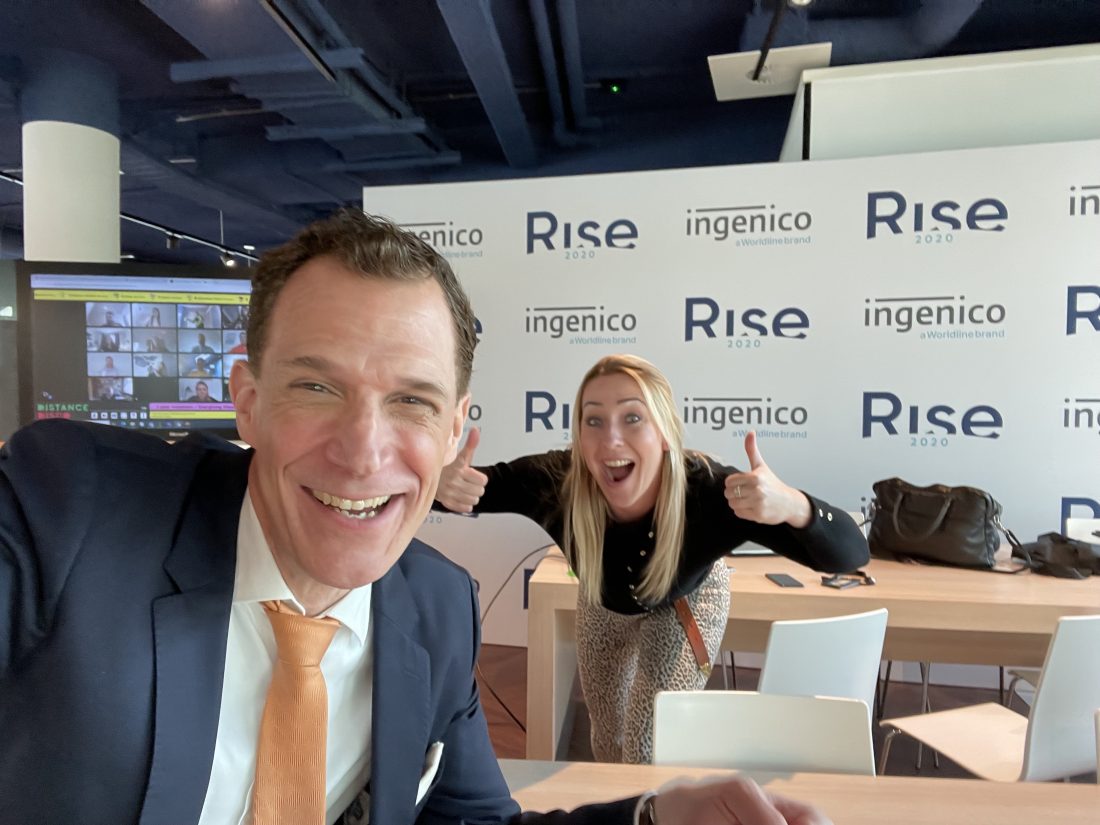 1 Year of ‘HOW NOT TO ZOOM: a Videoconference Mini-Show

1 Year of ‘HOW NOT TO ZOOM: a Comedy Roast for Your Awful Online Meeting, April 2021

It was April, 2020 when I got a phone call: “Could you do 10 minutes of comedy about video conferencing for our weekly video conference?” I said YES. And it was such a hit, I developed a new videoconference mini-show called HOW NOT TO ZOOM, aka “Sharing WORST Practice.”

It’s been a year now, and still you haven’t learned anything about basic Framing, Lighting, Background. It’s hilarious! You need a Comedy Roast. Either to kick off your meeting, or to end it.

More often, I’m being asked to do longer sets of 30-45 minutes – including a tailored powerpoint show. No problem! By now, I’ve performed HOW NOT TO ZOOM for small Management Teams, for entire Business Units, and for AGM Annual General Meetings with thousands of online viewers. And wow, I’ve learned a lot. For example: DON’T TRY THIS AT HOME. If at all possible, I try to be on location in a pop-up studio at your office. Then, when the livestream – inevitably – freezes up, instead of wondering “Is it my wifi?” I can say “call Kevin from IT!” 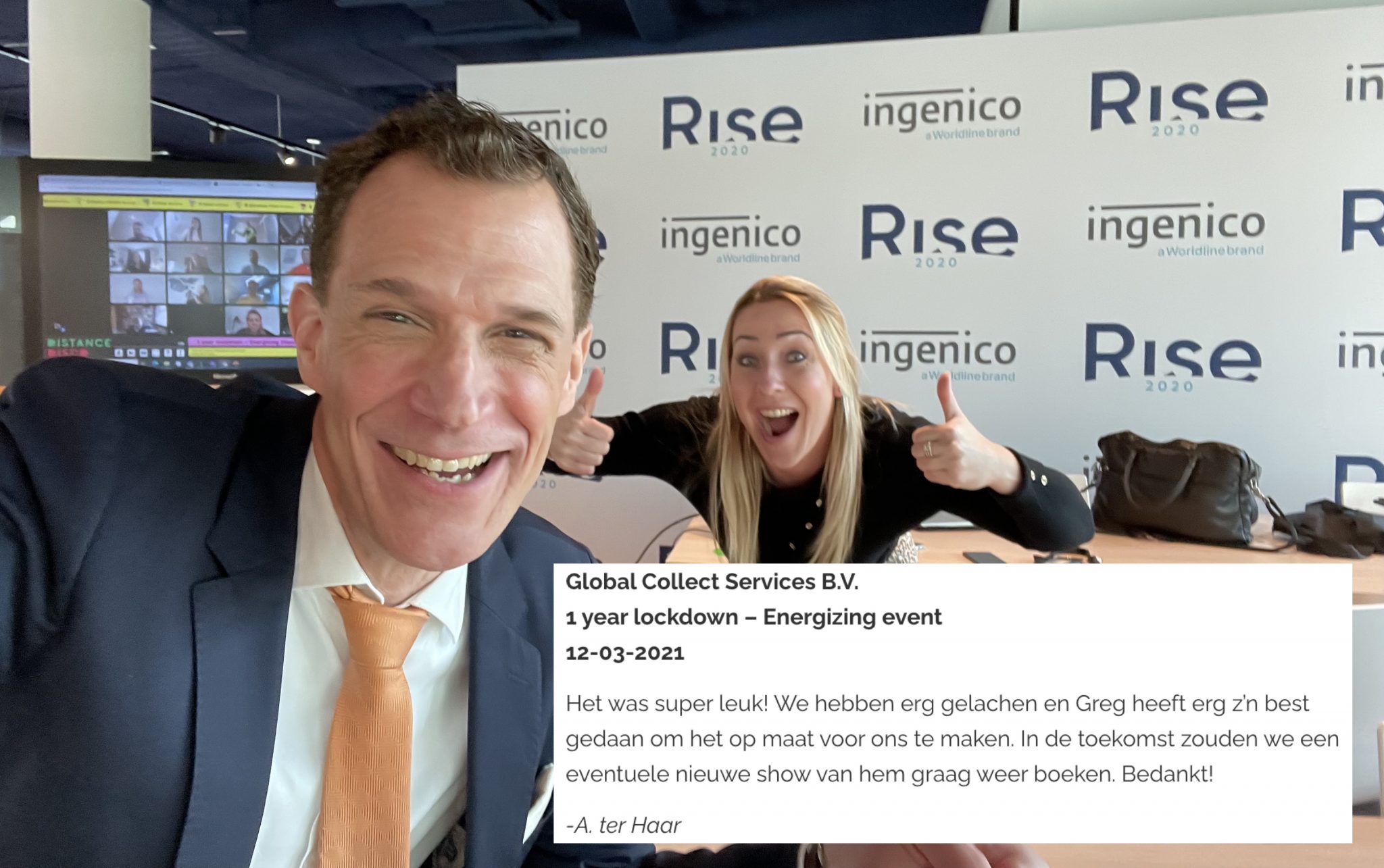 I did a series of HOW NOT TO ZOOM shows to ‘celebrate’ One Year of Working from Home. Here’s some feedback from Ingenico in Hoofddorp:
“Het was super leuk! We hebben erg gelachen en Greg heeft erg z’n best gedaan om het op maat voor ons te maken. In de toekomst zouden we een eventuele nieuwe show van hem graag weer boeken. Bedankt!”
“It was super fun! We laughed a lot, and Greg did his best to tailor the show to our office. In the future, we’d love to hire Greg for his new show. Thanks!”

‘NEW SHOW’ -? Well, okay then…
Coming soon: from the makers of HOW NOT TO ZOOM – it’s the ZOOM IMPROV WORKSHOP. Again, based on someone asking “Could you do that improv training you do, but for a videoconference?” And again, the answer was YES.
Or more specifically, YES AND.

WATCH: HOW NOT TO ZOOM 60-second teaser

Greg Shapiro presents HOW NOT TO ZOOM

A couple weeks ago, I got a phone call: “Could you do 10 minutes of comedy for our weekly video conference, about video conferencing?” I said YES. And it was such a hit, I’ve now developed a 10-minute package I call HOW NOT TO ZOOM.

HOW NOT TO ZOOM 60-second teaser

Lockdown life, 2020. Working from home means video conferencing. And – despite the tutorials – many of us are slow to adapt. Time for a new training strategy?
Comedian Greg Shapiro presents HOW NOT TO ZOOM. Kick-off your next online meeting with 5 – 10 minutes of “Sharing WORST Practice.”

Whether you use Zoom, Skype, WebEx or Teams – Shapiro’s interactive presentation will parody the Seven Deadly Sins of video conferencing. Including: Awful lighting, Unflattering angles, Embarrassing backgrounds AND Yelling at your kids when you think you’re on mute.

Do yourself a favor and start your next video conference with a guaranteed icebreaker. More than that, it’s an effective teaching method: sometimes the best example of How-to is How-NOT-to.

Stay safe, keep laughing.
For bookings please contact my other half at inezdegoede@gmail.com.