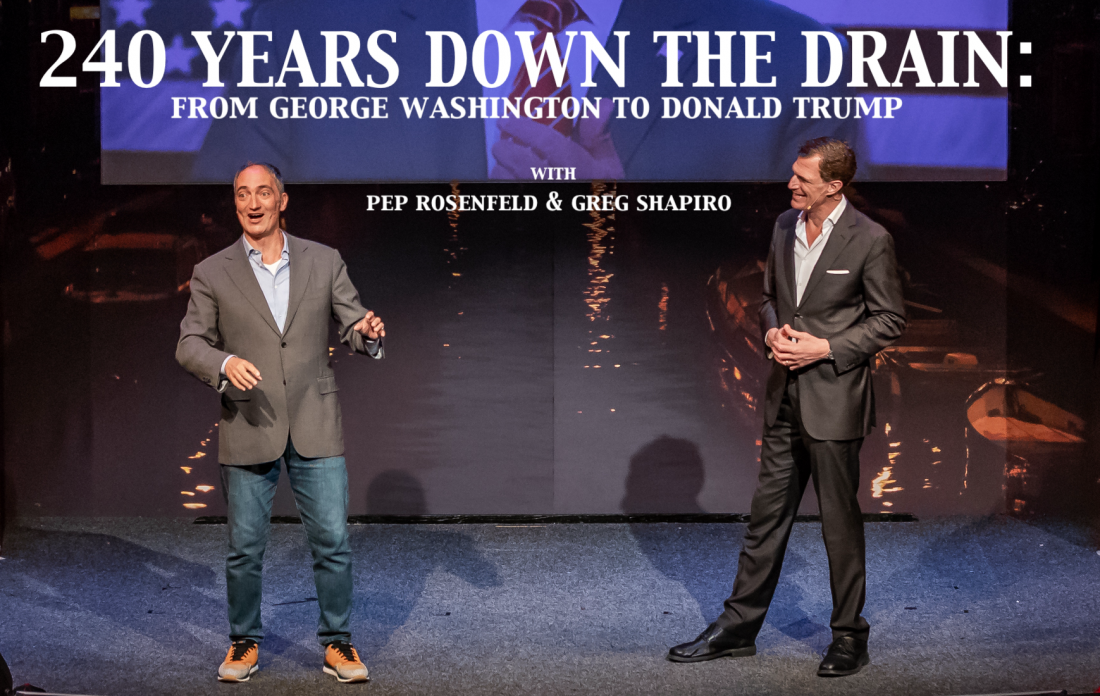 After their critically acclaimed shows ‘Trump Up the Volume’ and ‘Lock Him Up,’ Rosenfeld & Shapiro team up for a new political comedy show: ’240 YEARS DOWN THE DRAIN – from George Washington to Donald Trump.’ Because George Washington was the first president of the United States, and – come 2024 – Donald Trump might be the last.

Rosenfeld & Shapiro will use their traditional mix of standup and improv to celebrate American dysfunction. You will see a debate between Washington and Trump. You will see Inner-City Americans realize they’re not that different from rural MAGA Americans. And you will see the QAnon Proud Boys unveil their latest conspiracy theory.

Click here to see the full line-up for the BOOM CHICAGO COMEDY FESTIVAL. And our show on 11 July.
https://boomchicago.nl/boom-chicago-comedy-festival/

‘240 YEARS DOWN THE DRAIN – from George Washington to Donald Trump’ can be seen at the Boom Chicago Comedy Festival on 11 July at 19:30. Yes, it’s a Monday, but that won’t matter since you’re probably already gone on vacation.

…and if you can’t make it on 11 July, don’t worry! We’ve got a feeling 240 YEARS DOWN THE DRAIN will be back on a recurring basis starting this fall. 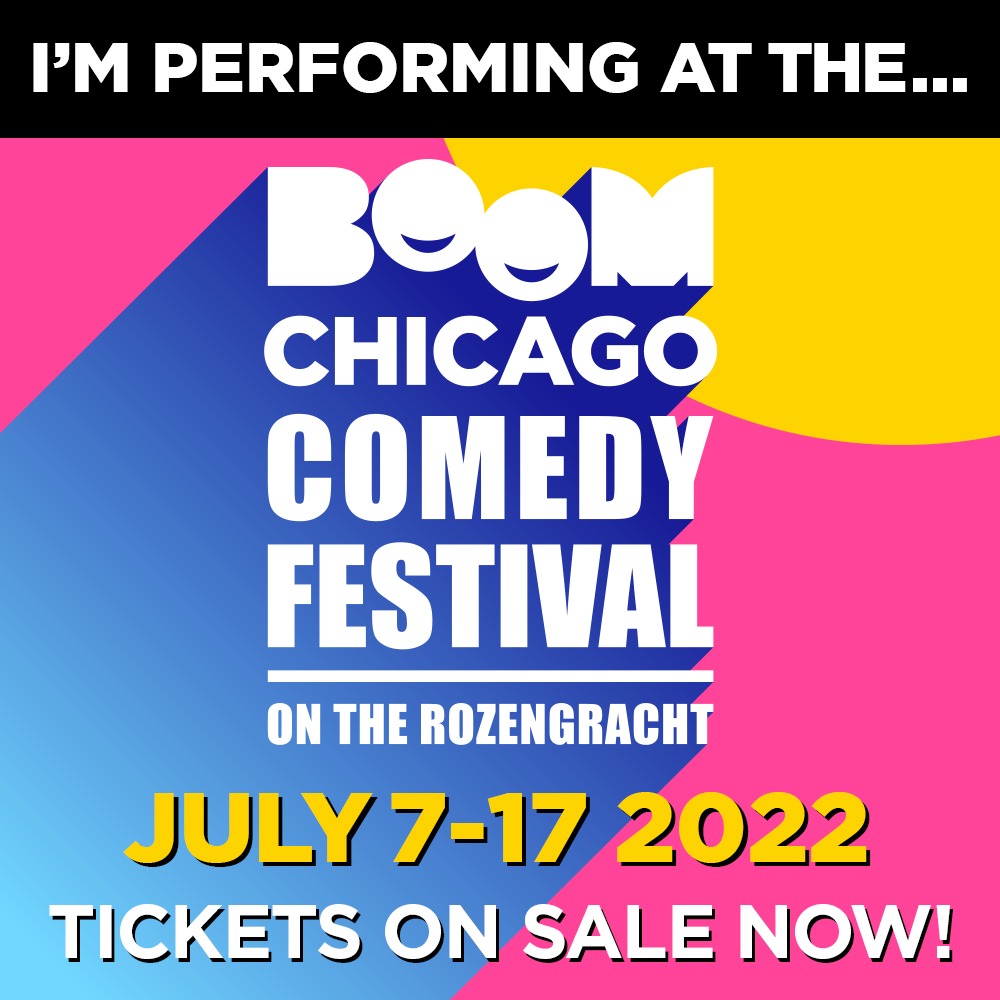 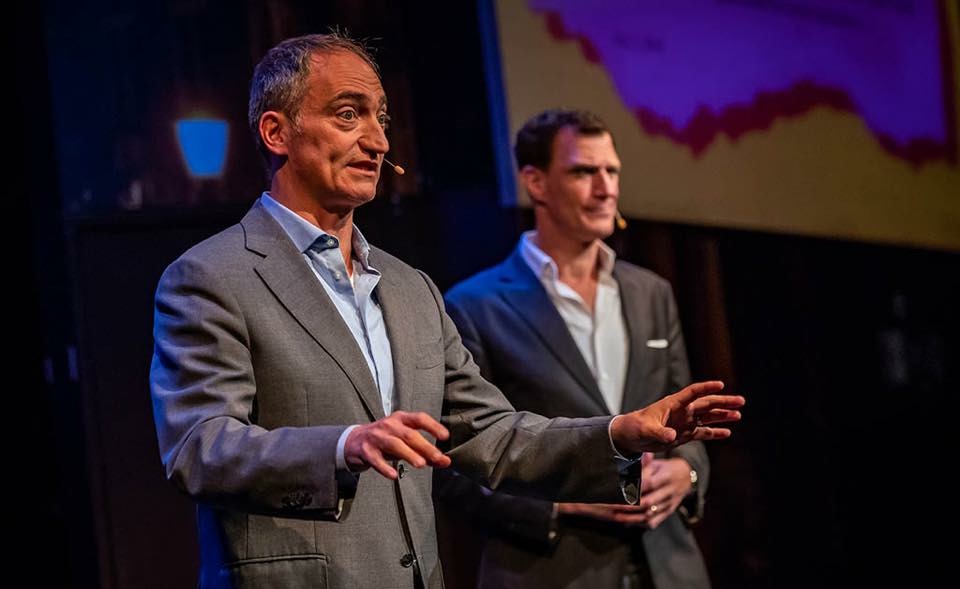 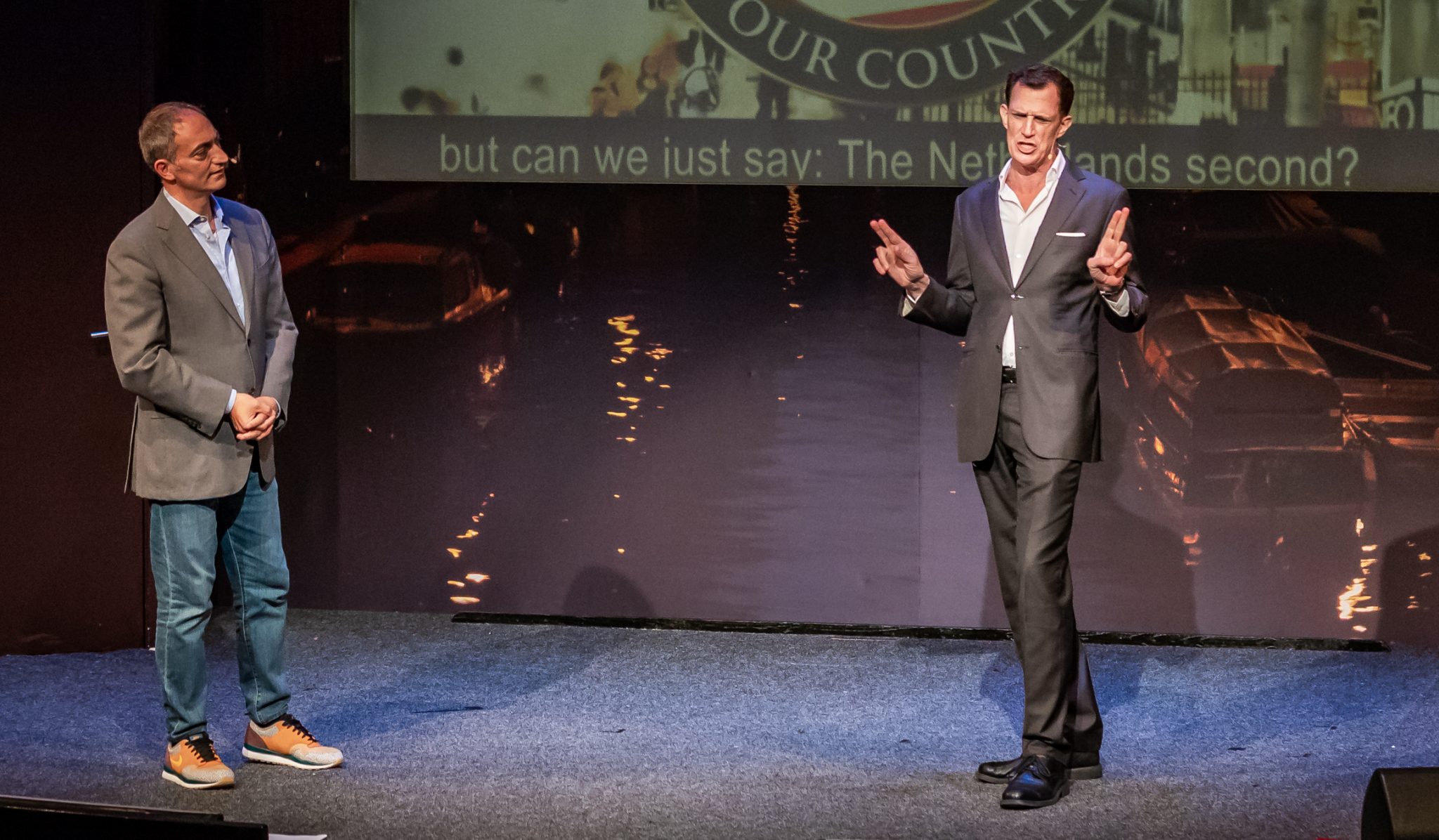 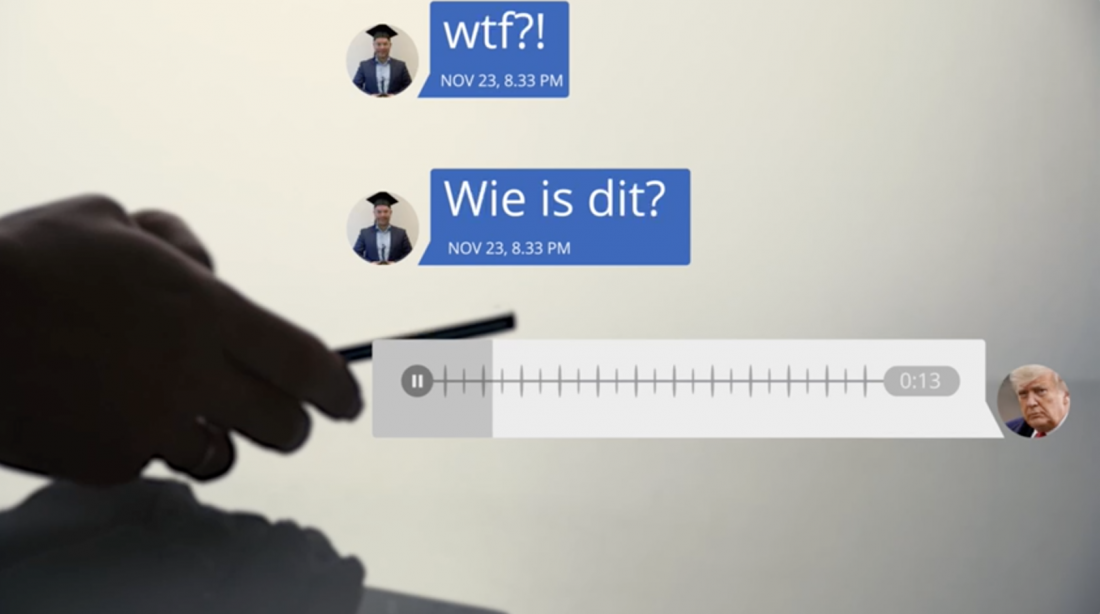 Greg Shapiro and the Office Jester Team Up for Trump Video 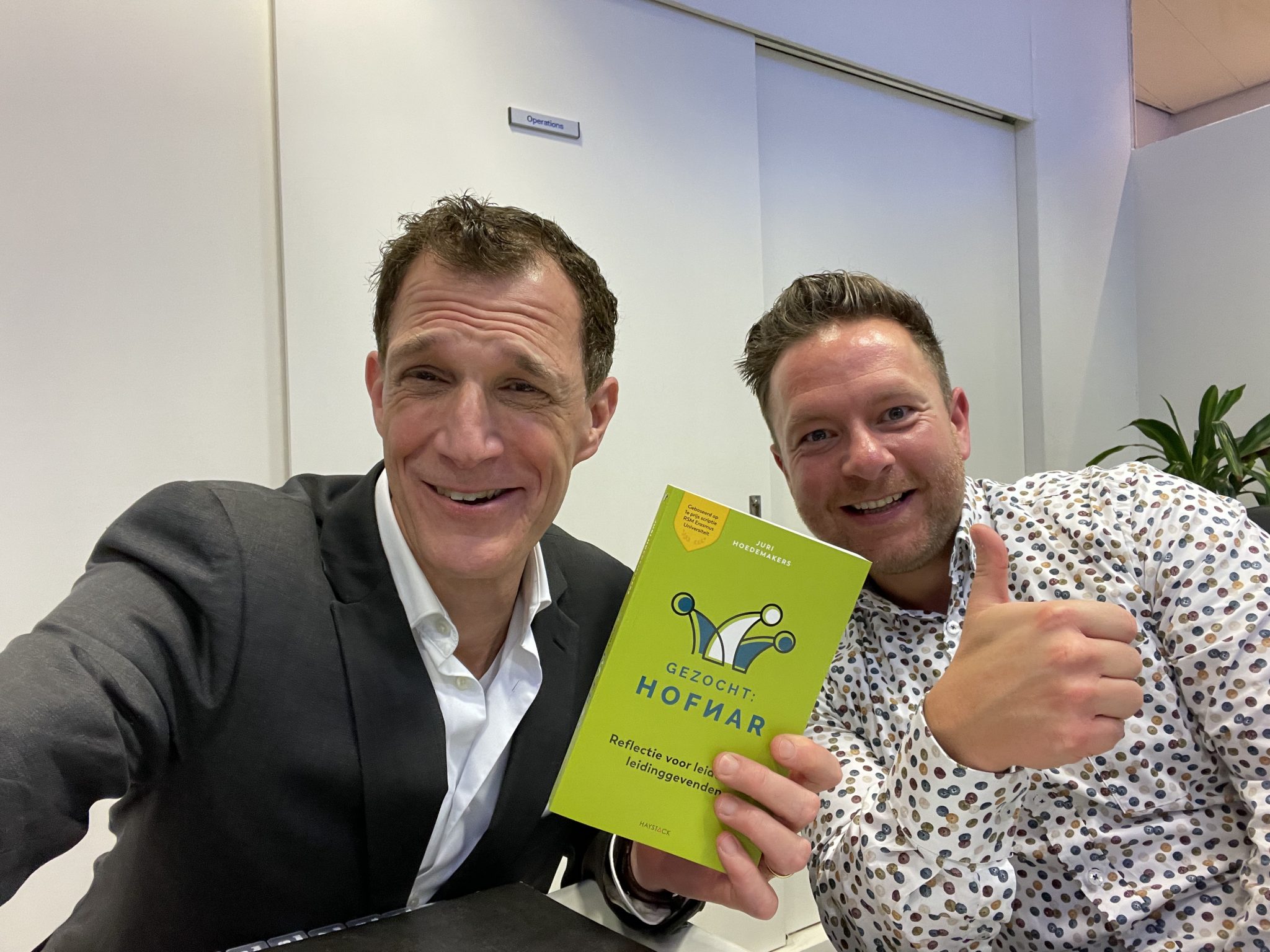 1) Comedian / Corporate Speaker. Me, I started out at theater school, and I quickly transitioned to improv comedy. I came to the Netherlands to work with the Boom Chicago comedy theater in the booming 1990s – when every Dutch business became an e-business, and every Dutch office transitioned to English. Hence, Boom Chicago was quickly called upon to perform comedy for business events. Many, many business events: for Philips; Heineken; KLM; Shell; Unilever. All the biggies.

According to most comedians, corporate entertainment is the worst. “Vanilla jokes for boring events, just to get a paycheck.” But I quickly realized it can be the opportunity to ‘speak truth to power.’ We comedians can make jokes about the boss that the employees can’t. It doesn’t have to be ‘vanilla jokes.’ It can be more like a roast. Closer to the comedy speech at the White House Press Correspondents Dinner: you make jokes about the president to their face. Or, as I put it at Boom Chicago years ago: “We make fun of your boss in front of your boss, and the one who has to pay for the whole thing is your boss.”

2) Academic / Court Jester. I met Juri Hoedemakers at a networking event for Speakers Academy in Rotterdam. Juri was the man who had done his PhD on the role of the jester in the modern ‘court’ known as ‘Upper Management.’ Sounds familiar! It turns out we had come to the same place from different directions.

Juri had just written his book Gezocht: Hofnar. Reflective voor Leiders en Leidinggevenden.
Of course he did this all in Dutch (at Erasmus University). And now he’s speaking for corporate events about the importance of reflection for business leaders. According to his research, every leader has a blind spot, which is to take oneself too seriously. Leaders need jesters to help their message connect with their teams.

Juri was of course a fan of the Trump voice I did for the ‘Netherlands Second’ video on Zondag Met Lubach. So I did a quick voice recording to promote his book.
And here it is. [Video created by Jeroen Smolders] 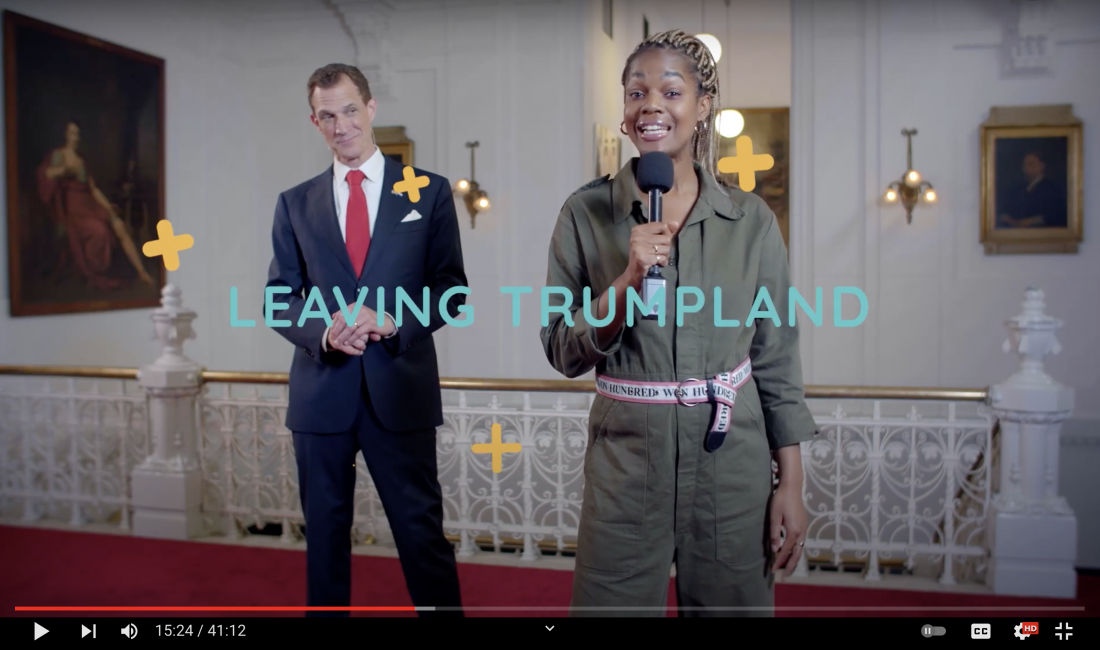 I wrote a comedy show about America during Trump and during Covid. It’s called LEAVING TRUMPLAND. And it’s partly about how Trump and Covidiots killed my stepfather.

Most of my performance dates were cancelled due to Covid. But thankfully, a Dutch performance series asked me to perform part of my show for them, at the ITA International Theater Amsterdam. And here it is:
GREG SHAPIRO’S LEAVING TRUMPLAND on ‘Cultuurexplosie Live.’ (link below) 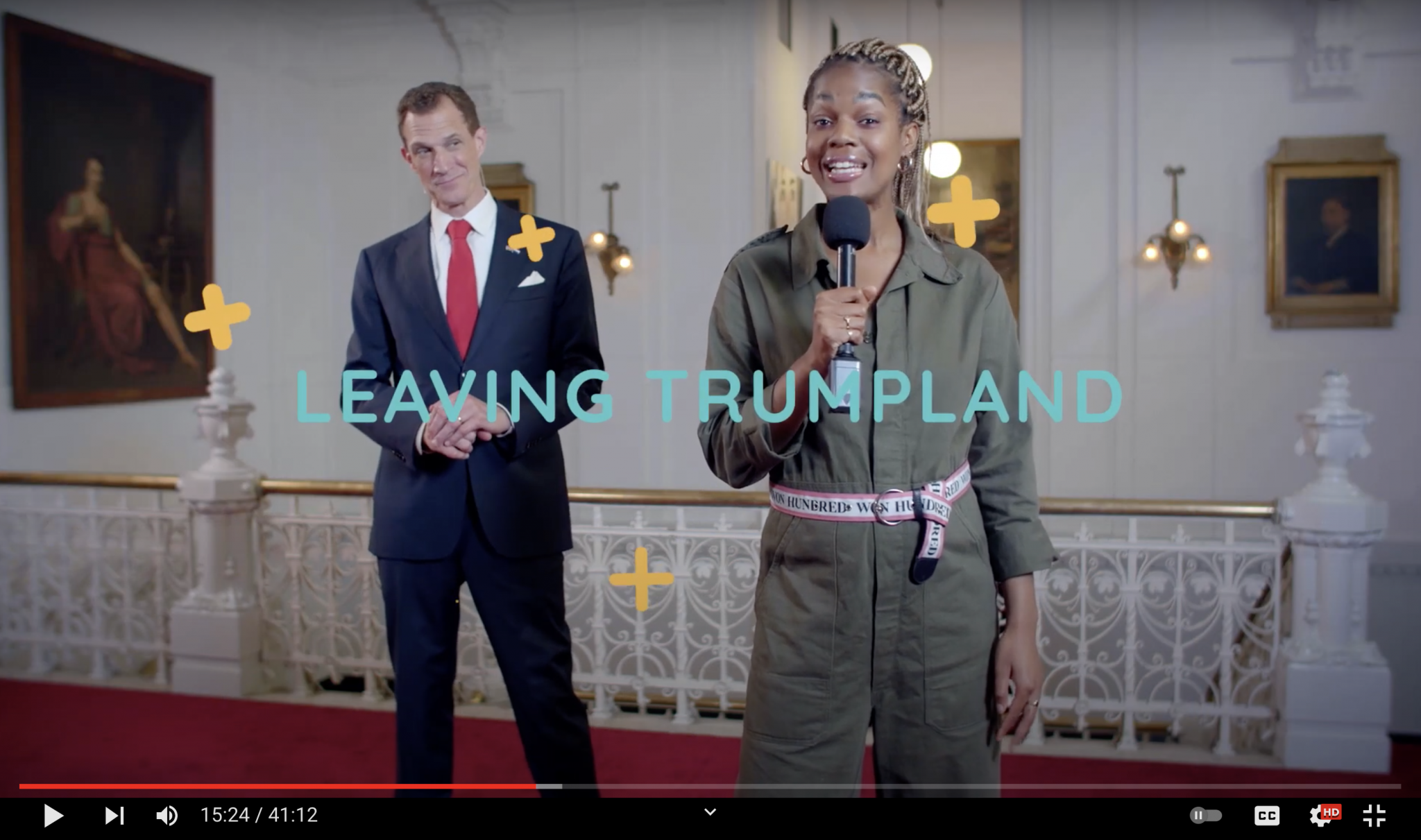 My previous show was called The Madness of King Donald. This show is more personal. Ever since I moved to the Netherlands, my family and friends keep asking “When are you moving back? When are you coming home?” And now, since 2020, they’re asking “What is it like in the Netherlands? Maybe we could come live with you?” And I tell them “Nee! Vol is vol!”

And yes, I wrote new bits about President Biden. Did you hear what he said today? No. No one did. No one cares! And it’s wonderful!
We don’t have the mental space to pay attention to Joe Biden. We’re still recovering from 4 years of Post-Traumatic Tweet Disorder.  America is like a toilet clogged with 4 years of toxic dumps. Biden is the plumber. And as happy as we are that Joe the Plumber is on the job, I hope he knows it’s not like we’re not going to WATCH, right? Just let us know when you’re done.

We can’t pay attention to the current president, because some of us are still mourning. As for me, I found out in the summer of 2020 that my stepdad had Covid. In a nursing home at age 75. And the nursing home was in Trump country, aka ‘Trumpland.’ And my stepdad had a roommate. And the roommate was like many Republicans in the US: they believe in Freedom more than Science. In fact they believe in “Freedom FROM Science.”

And for the rest of the story, you’ll have to watch: 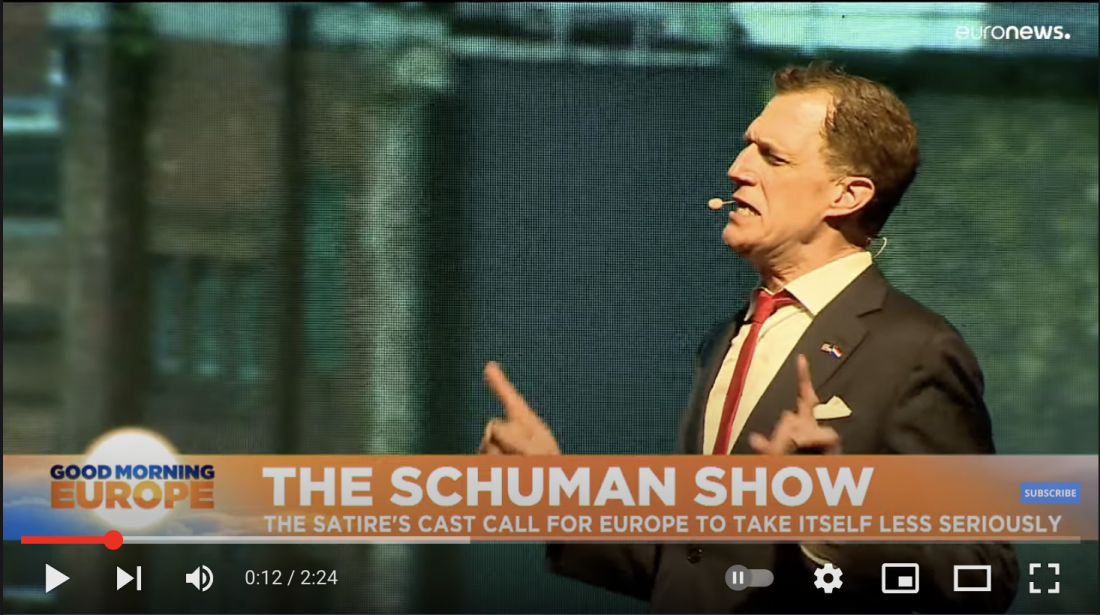 Greg Shapiro Guests at the ‘SNL of the EU’: The Schuman Show

For years, I’ve been wondering why the EU doesn’t have a late night comedy show. I’ve even been trying to make one myself since 2014. But now there’s a new kid on the block: the Brussels monthly series called The Schuman Show. You see, Robert Schuman is one of the founders of the European Union. And The Truman Show is a movie from the 90s. Together, this is apparently enough to generate a full audience in Brussels. A very full audience. As I found out when I took part in October. 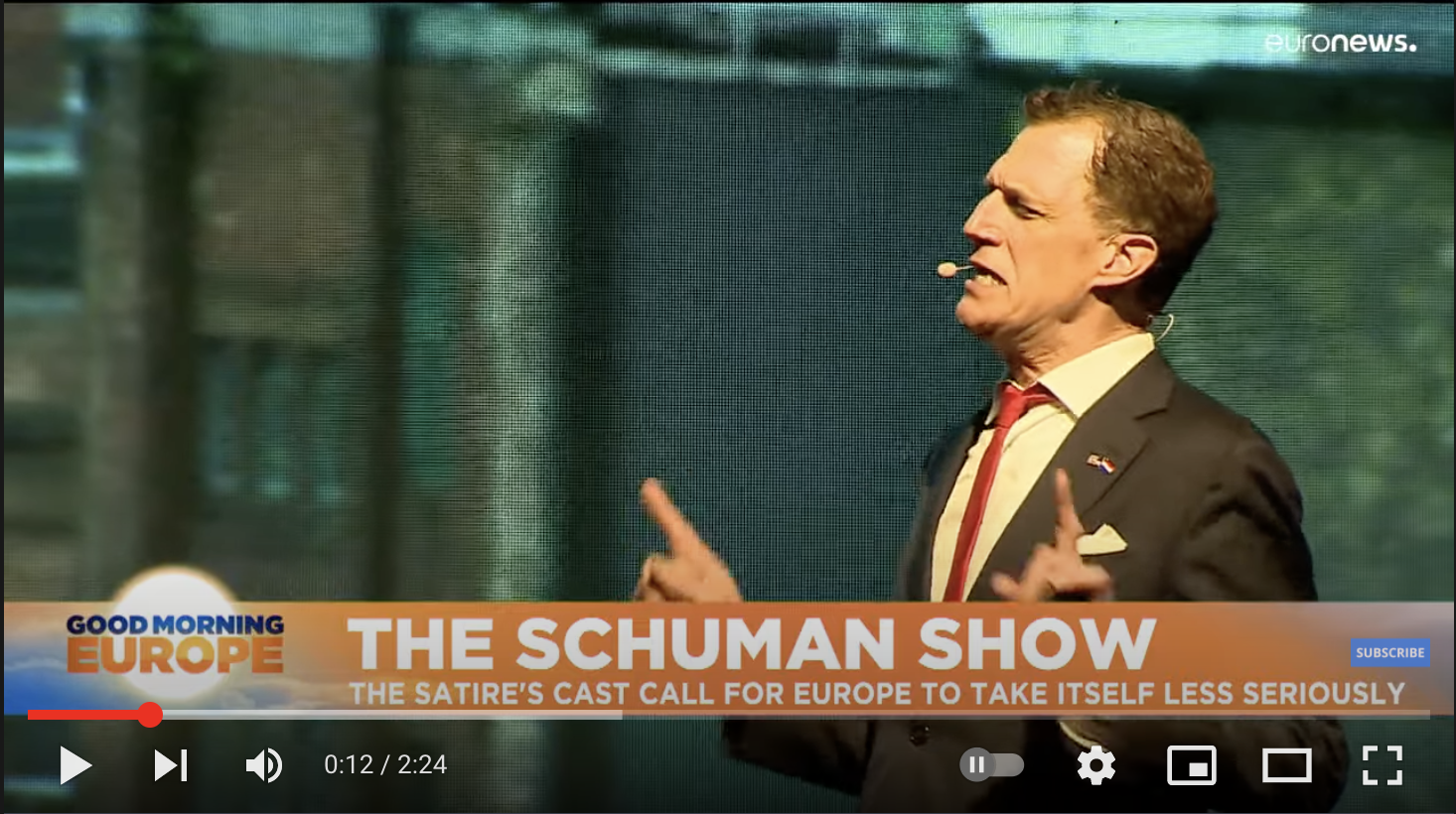 YOUTUBE: EuroNews: The Schuman Show: or how to poke fun at EU politics 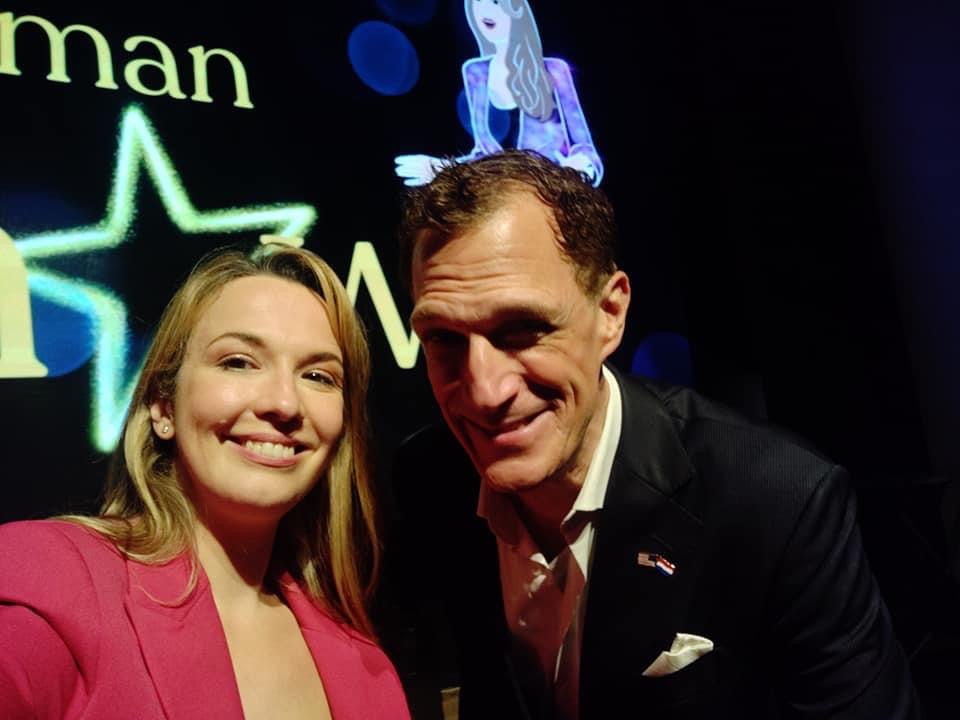 The Schuman Show is the brainchild of Kelly Agathos, an expat who started out inside ‘the Brussels Bubble.’
These days, Kelly is the founder of ‘ImproBubble’ – the closest thing to a Boom Chicago comedy theater in Belgium. I made contact with Kelly and said I’d be interested in seeing a show someday. She turned around and asked if I would want to participate in the October edition of The Schuman Show. I said “YES, AND.” 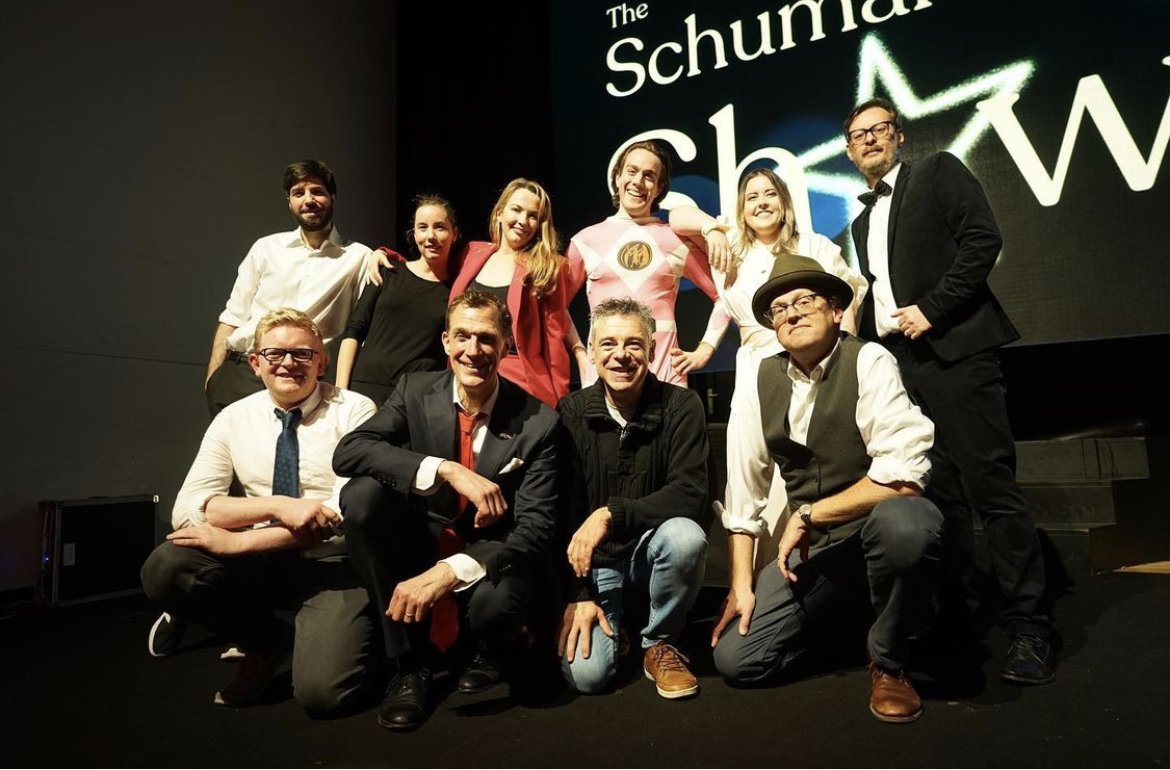 I was invited to improvise a scene – as Donald Trump – interacting with an improvised Angela Merkel. Merkel would be played by Barry McKeon, a crowd favorite. Based on current events – Merkel would be at the COP26 summit in Glasgow, and Trump would ambush her backstage, since he was in Scotland to play golf and had no idea there was a summit going on.

The show started out with a cold open, reminiscent of Saturday Night Live. In which EU commission President Ursula ‘VDL’ von der Leyen has to deal with Poland and cutting off their funding. The scene ended in a rap battle called ’99 Problems But a Budget Ain’t One.’ There were sketches, songs, improvisations. And then I played my Trump imitation – probably too well. Wow, that crowd hated Trump! And they loved Angela poking holes in Trump’s thin skin. 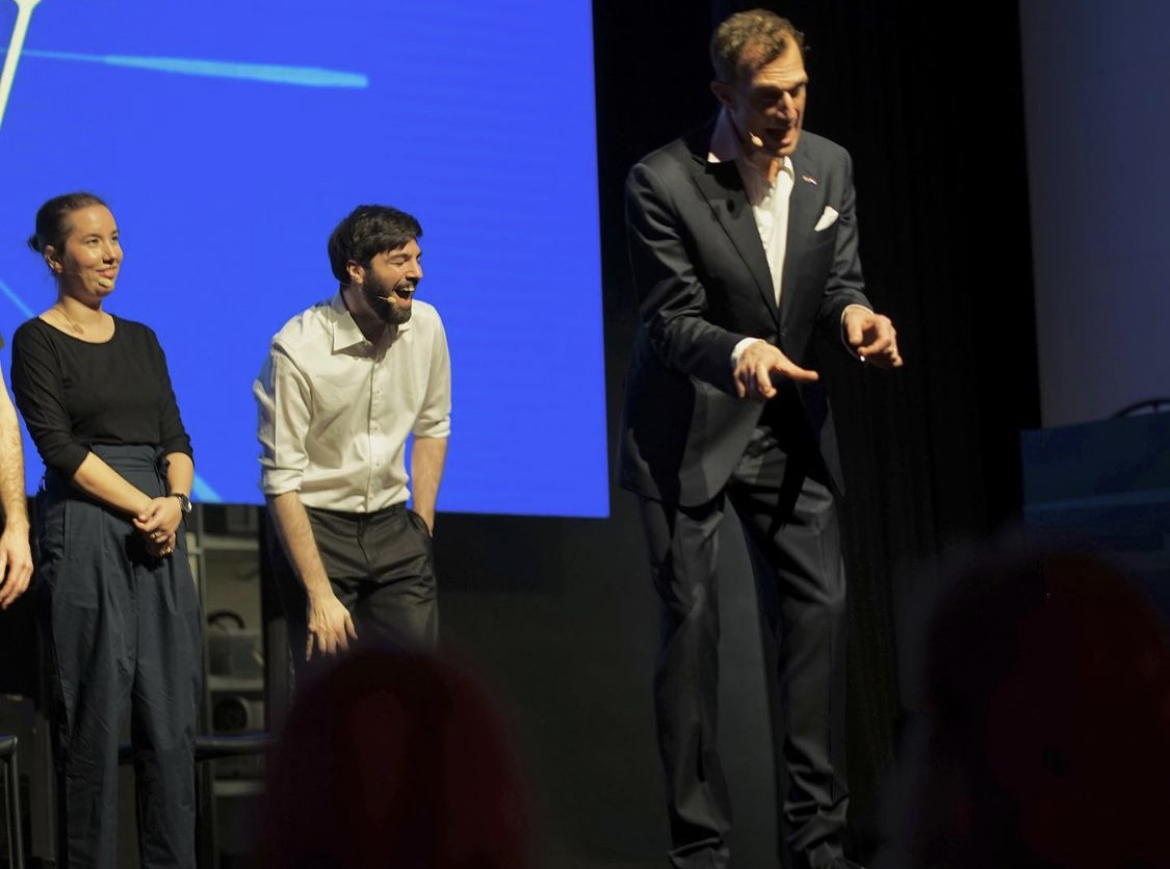 Next up, I got to drop the Trump imitation and improvise as myself. With the other actors, I took part in a game of ‘Worlds Worst.’ The audience shouted out ‘Consultant.’ And as ‘World’s Worst Consultant,’ I simply said “Hi, I work for McKenzie.” And I got a huge laugh! Always gratifying to get a laugh based on an article I read in The Economist. 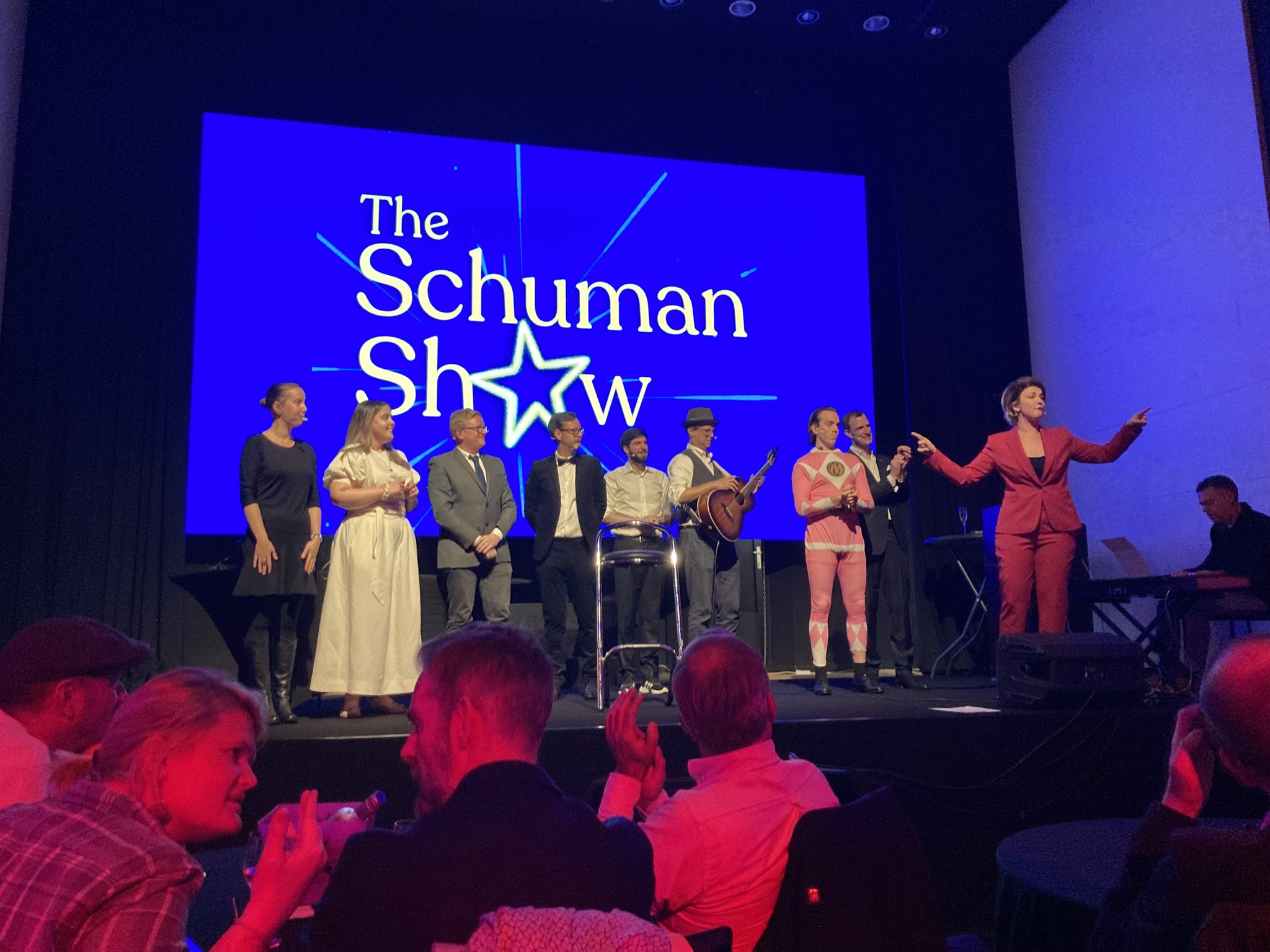 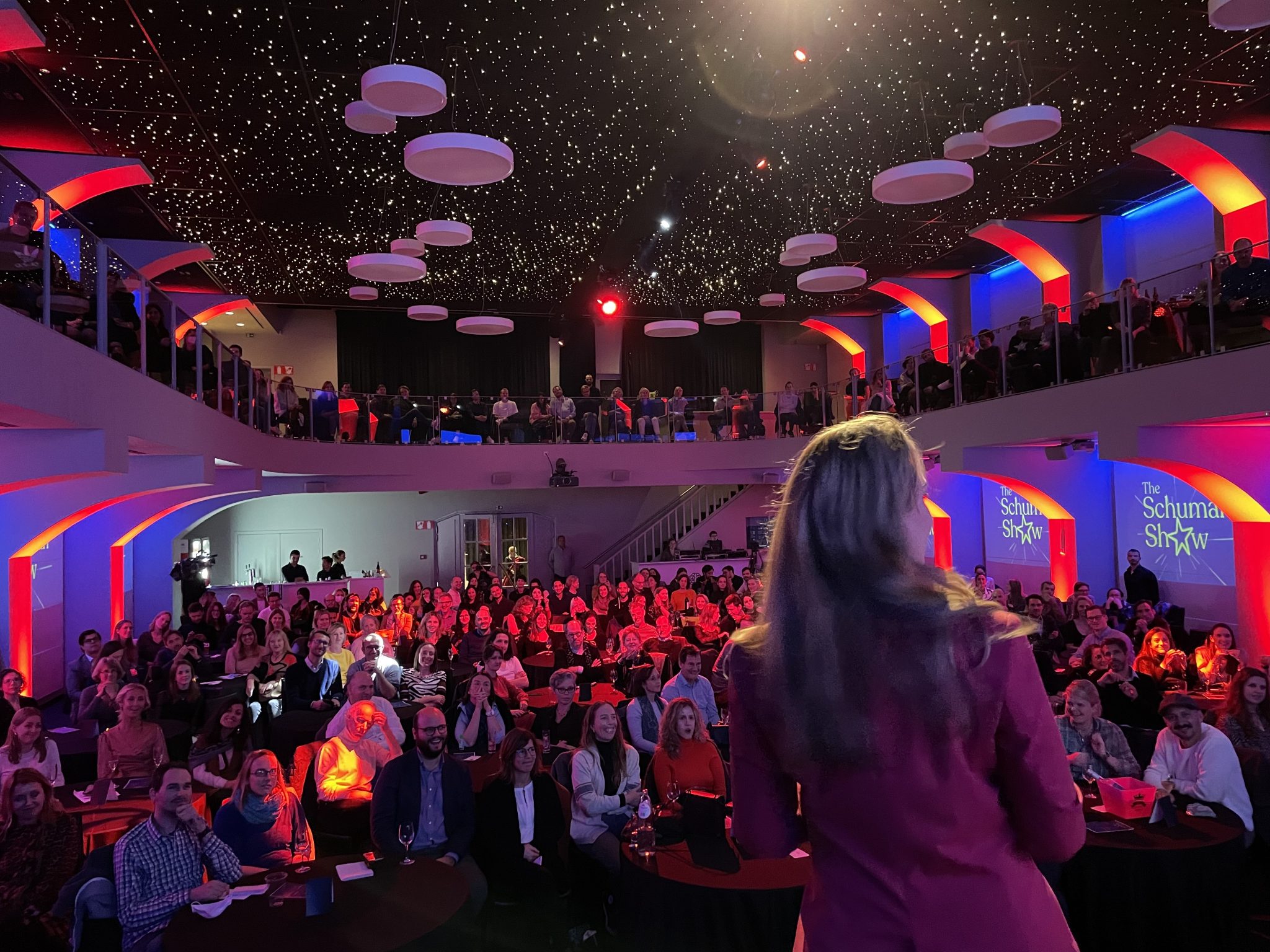 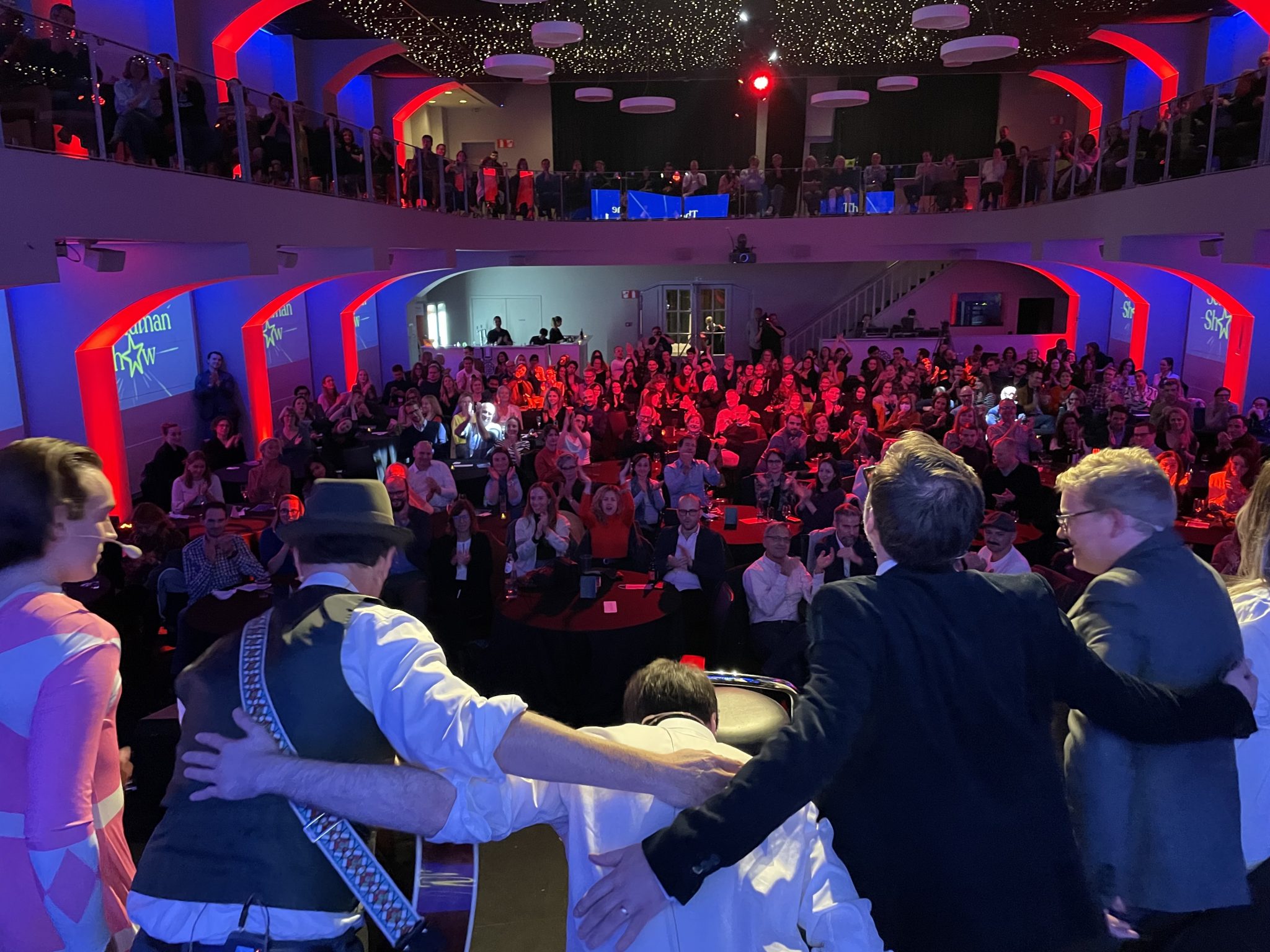 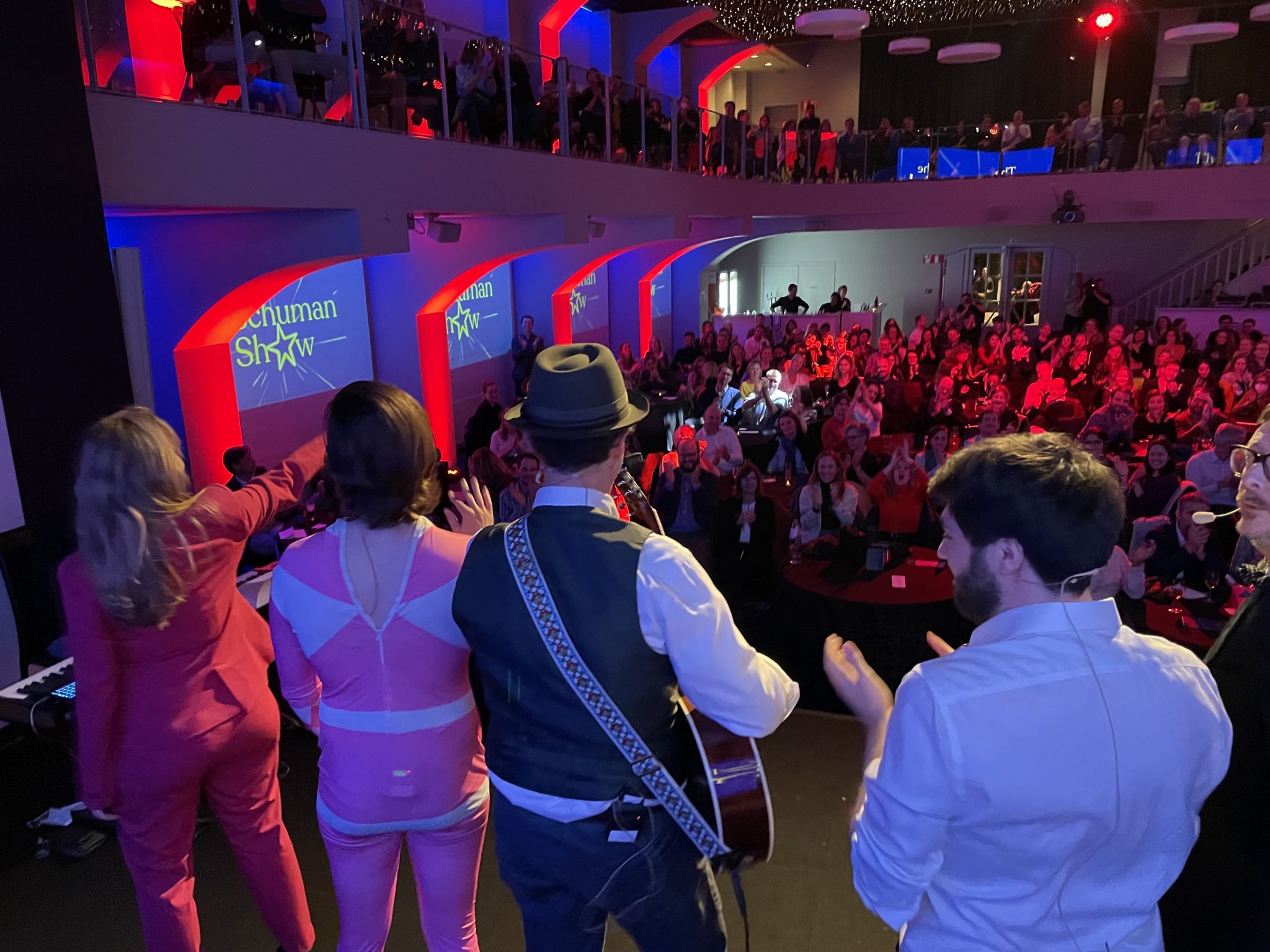 The Schuman Show according to Kelly Agathos:
“A Late-Night-meets-SNL variety show; I am the host and open with a monologue. It’s called The Schuman Show (named after Robert Schuman, one of the founders of the European Union, but also the name of a roundabout in the heart of Brussels’ European quarter- a bit like what K Street is for Washington).
Little by little, I found some Brussels-based folks from the local stand up and improv scene, and The Schuman show was born.

We’ve received a lot of attention and we have plans to put more content online in the future, so that we can really reach a large Europe-wide audience and finally make ‘Boring Brussels’ funny, interesting and relevant to the average citizen.” 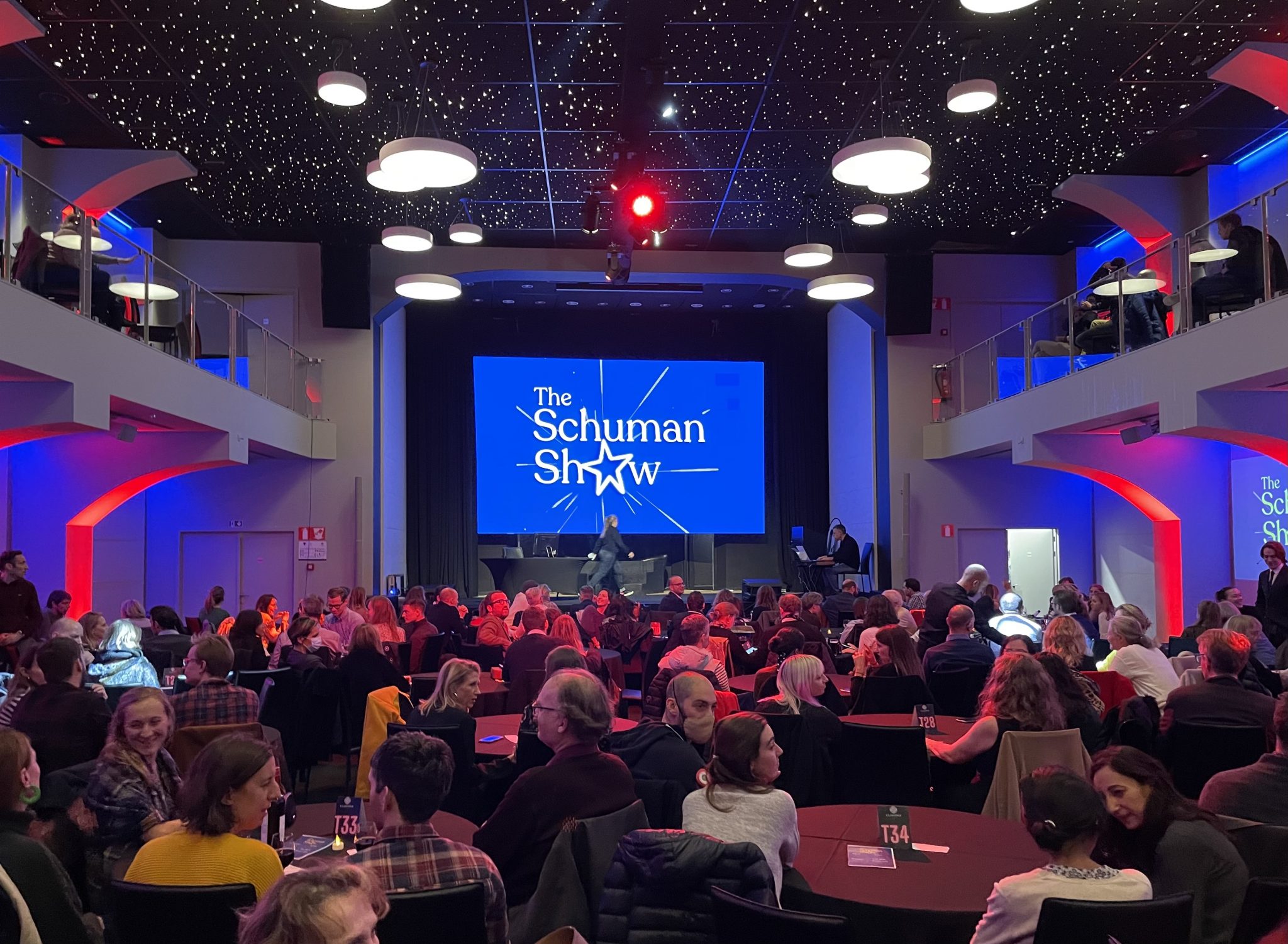 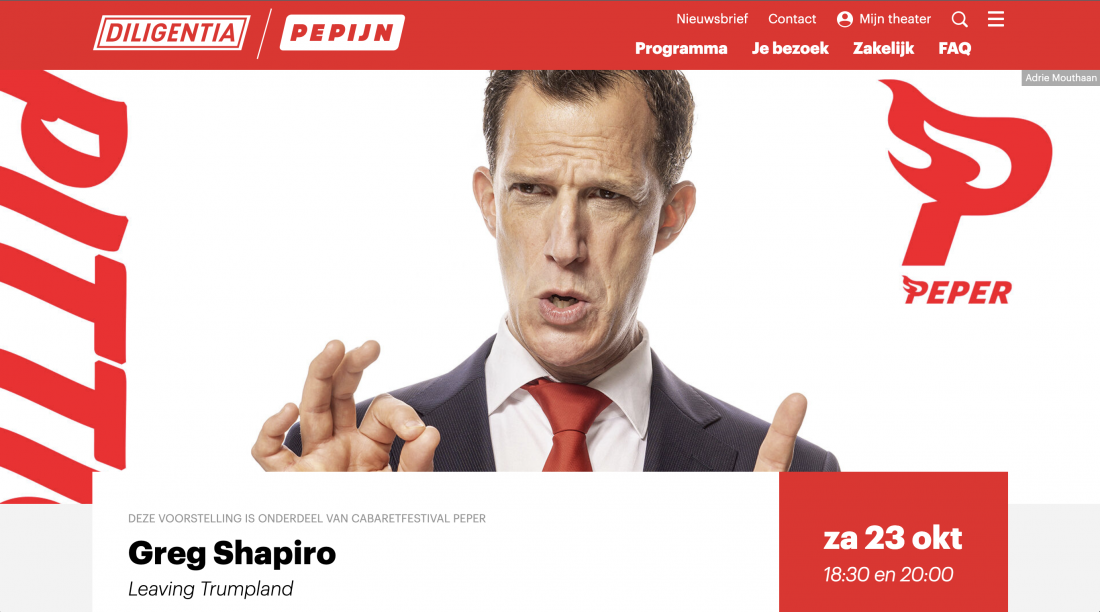 October has turned into a busy month, as I have accidentally assembled a list of Dutch cities where I’ll be performing. (And at least one date in Brussels…)

But the big news is: I’ll be featured in CABARETFESTIVAL PEPER in Den Haag. Organized by Theaters Diligentia & Pepijn, this current events festival calls itself ‘De Lachspiegel van de Samenleving,’ ie ‘Holding a mirror to today’s society.’ I’ve repurposed my solo show LEAVING TRUMPLAND for Fall of 2021: now with less Trump and more Covidiots. At the end of my show, we will be joined (via Zoom) by my former Boom Chicago colleague Tarik Davis, who will give us his New York perspective on Before & After the Lockdown. (And he might give us a preview of The Amber Ruffin Show season 2 – as well as his new Broadway show Freestyle Love Supreme.) 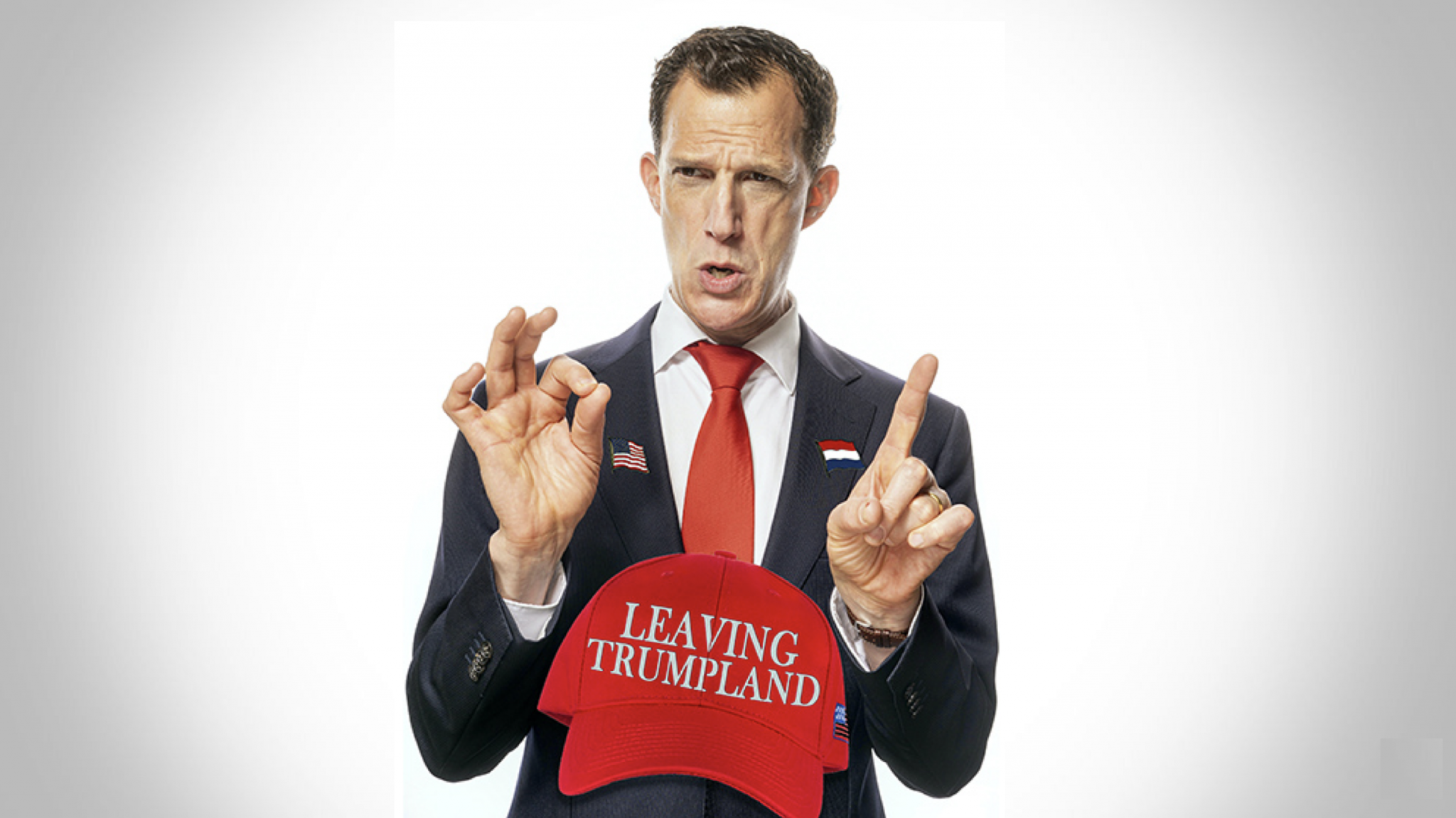 This month, I’ll be doing a series of open mic shows to try out new material. Starting at De Pelgrim in Rotterdam. And I’m excited to try out the new Comedy Cafe Utrecht location! After that it’s back to Fox & Solo in Amsterdam. And I’ll be rounding out the month with my new friends in Brussels from ImproBubble. They’ve developed a new monthly sketch & improv format called The Schuman Show. And I’ll be improvising a sketch with The Real (fake) Angela Merkel.

(& driving back thru Luxembourg for cheap fuel) 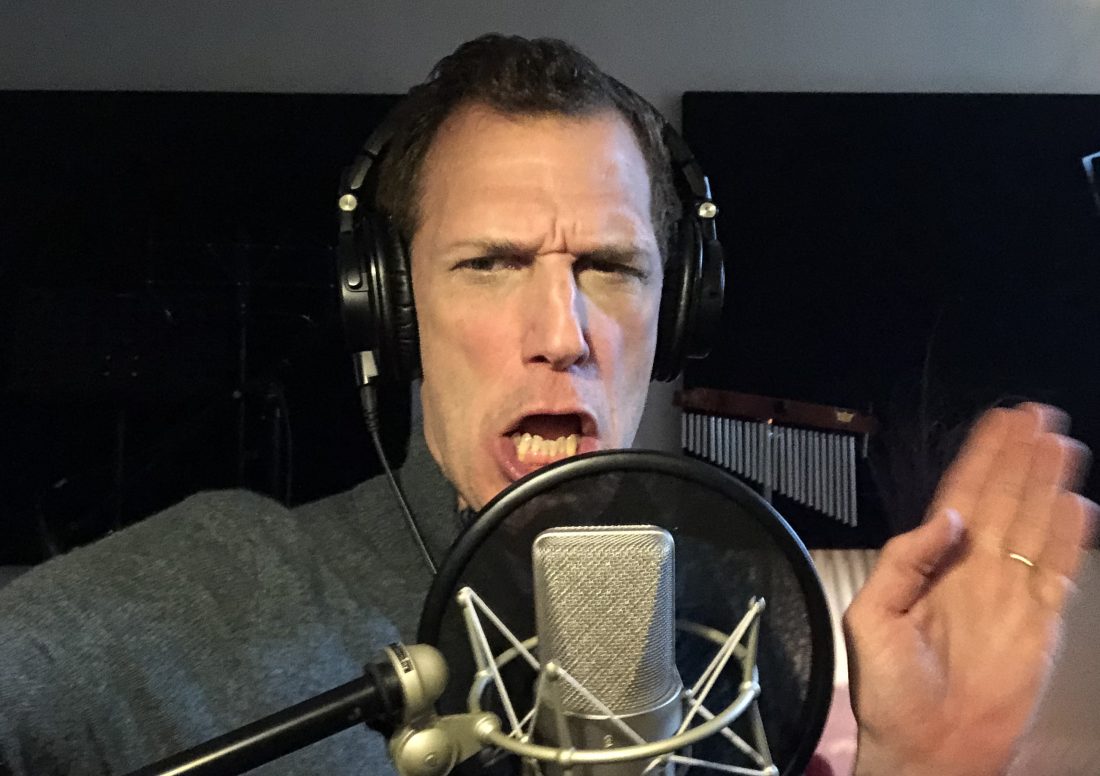 THE VOICE OF THE ‘NETHERLANDS SECOND’ VIDEO OFFERS CHRISTMAS TRUMP VOICE MESSAGE – FOR A GOOD CAUSE: raices.org.
RAICES. The Refugee and Immigrant Center for Education and Legal Services, helping the families affected by the Trump Migrant Separation Policy. 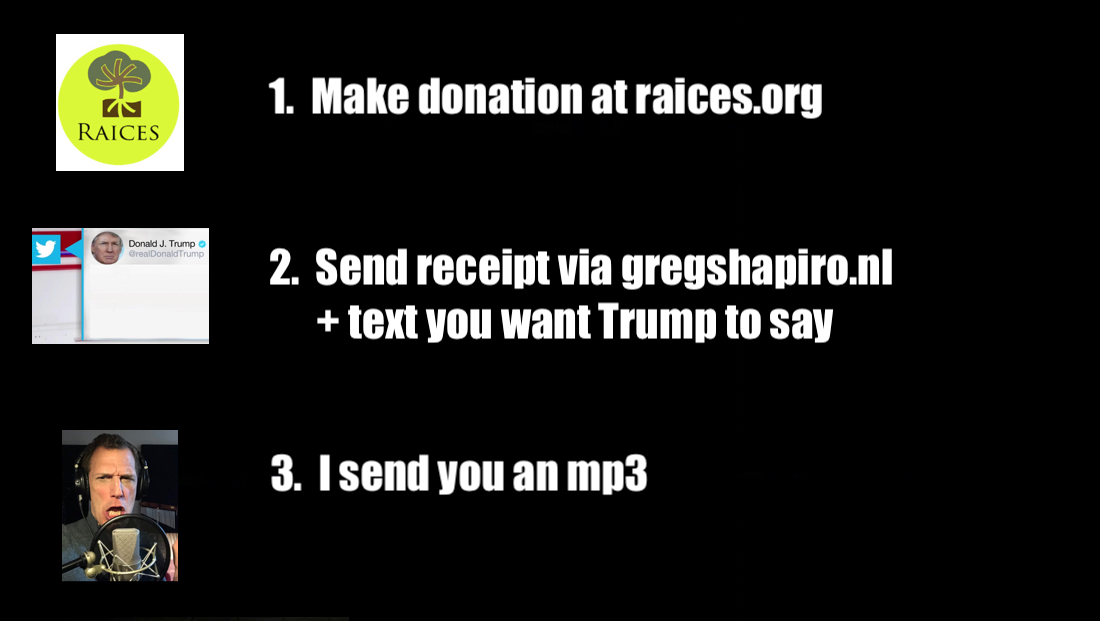 I’ve been working on this show called The Madness of King Donald: a Trump Survival Guide. Offering much-needed therapy for folks suffering from Trump Outrage Fatigue. And I’ve discovered the best way to help yourself is to stop focusing on the bully and instead focus more on his victims. What better way to help the migrant kids separated from their families – than to use Trump’s voice against him?

Ever since the ‘Netherlands Second’ video went viral, I’ve been getting requests for Trump Voice Messages. “Can Trump speak my outgoing voicemail?” / “Can Trump insult my boss?” Mostly, I’ve had to say NO, for reasons of exclusivity. But now I’m free to offer you a Trump voice message – for a good cause.
1) Make a donation at raices.org.
2) Send your receipt to gregshapiro.nl + the text you want Trump to say.
3) I send you an mp3 or wav file.
MERRY CHRISTMAS!
I have all the best ideas. Bigly. So great. 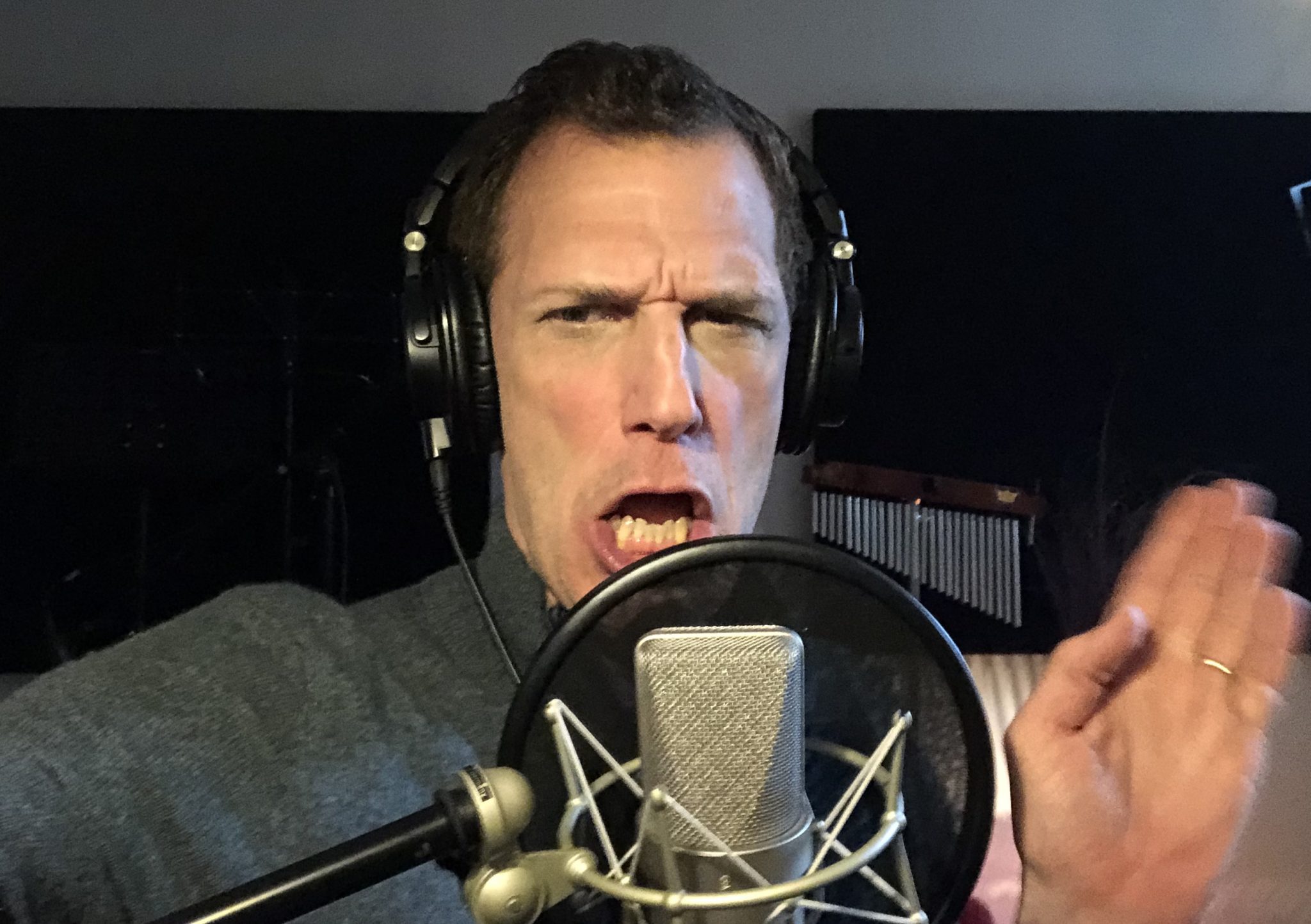